From the book jacket
As James T. Kirk prepares to retire from a long and illustrious Starfleet career, events in a distant part of the Federation draw him back to a part of the galaxy he had last visited as a young man – a mysterious world called Faramond whose name takes Kirk on a journey back to his youth.

At sixteen, Kirk is troubled, estranged from his father and has a bleak future. However, a trip into space with Kirk's father George and Starfleet legend Captain Robert April changes James' life forever, when a simple voyage aboard the USS Enterprise becomes a deadly trap. Soon, Kirk and father find themselves fighting a vicious and powerful enemy.

Before the voyage ends, father and son will face life and death together, and James T. Kirk will get a glimpse of the future and his own best destiny.

"How would it look to the young if we botched our final duty?"

"Kodos the Executioner… they, um, never found him, did they?"
"No, I'd like to find the bastard – what he put my family through and me through…"

"It stinks in here."

- A sixteen year-old James T. Kirk upon stepping on the USS Enterprise's bridge for the first time

"Quit lipping off and get… up… here."

- George Kirk, to his son Jim

"I ought to slingshot around the sun, go back forty-five years and slap myself." 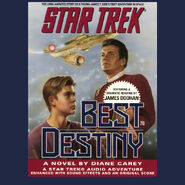 Retrieved from "https://memory-alpha.fandom.com/wiki/Best_Destiny?oldid=2710168"
Community content is available under CC-BY-NC unless otherwise noted.