Blonde was a color association to fair or light yellow or golden hair.

When Jonathan Archer witnessed a wraith on Dakala, he appeared to him in a form which he later described as young Human woman with long blonde hair. (ENT: "Rogue Planet")

During their Starfleet Academy days, Gary Mitchell aimed a "little blonde lab technician" at Lieutenant James T. Kirk a means of getting back at the overly serious instructor. Mitchell later confessed his actions to Kirk in 2265. (TOS: "Where No Man Has Gone Before")

Upon Doctor Leonard McCoy's arrival on the Shore Leave Planet, he spotted the White Rabbit from Alice in Wonderland. After calling up to the USS Enterprise and explaining what he saw to Captain Kirk, Kirk jokingly replied that "That's pretty good. I got one for you. The rabbit was followed by a little blonde girl, right?" McCoy, replied, "As a matter of fact, yes." Later, when Kirk and McCoy discovered the girl's footprints alongside the rabbit's, McCoy immediately recognized them as belonging to "The young blonde girl I saw chasing it." (TOS: "Shore Leave")

In the final draft script of TOS: "Shore Leave", Kirk guessed that "a little blonde girl" whom McCoy had allegedly seen had "untidy hair", although he leaves out this detail in the final version of the episode.

In their youth, Mark Jameson flattered Anne, his wife, by calling her "Annie with the golden hair." Years later, in 2364, on his deathbed, he again called her that name before he died, but she reminded him that it was now grey, but told her "I see only the gold." (TNG: "Too Short a Season")

While playing the role of Dixon Hill, Jean-Luc Picard attempted to excuse himself from the holodeck in 2364, to Lieutenant McNary, stating that he had other duties. McNary, who assumed he meant he had a prior engagement with a woman, inquired whether she was blonde or brunette. (TNG: "The Big Goodbye")

When Clara Sutter explained her imaginary friend Isabella to Deanna Troi in 2368, Isabella was described as having blonde hair. (TNG: "Imaginary Friend")

When Deep Space 9 was visited by advanced aliens, in 2369, who were able to allow the crew of the station to conjured whatever they dreamt, Quark conjured two "trollops" who mysteriously disappeared. In his search for the women, Quark found Odo to report that they were missing, calling the two simply "a blonde and a brunette." (DS9: "If Wishes Were Horses")

When Harry Kim tried describing what he believed to be a hologram named Marayna to Neelix, Neelix said the name didn't ring a bell. Kim then asked "How could you miss her? She's tall, athletic, blonde," which prompted Neelix to remember that she was "one of the entertainment directors" who was "giving Kes a hydrosail lesson." (VOY: "Alter Ego")

The following women were specifically identified as blonde: 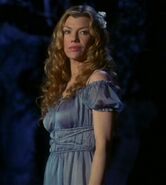 A Dakala wraith in Human form 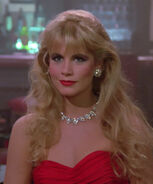 Minuet, as a blonde 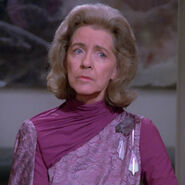 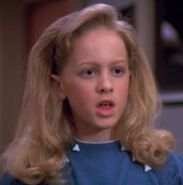 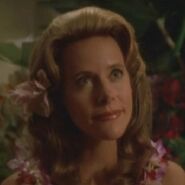 Marayna as a Human hologram
Add an image to this gallery

Retrieved from "https://memory-alpha.fandom.com/wiki/Blonde?oldid=2558752"
Community content is available under CC-BY-NC unless otherwise noted.