He is also a director and worked in this occupation for films and television series such as Hardcastle & McCormick, Riptide, Knight Rider, The A-Team, Rush Week, Jake and the Fatman, Father Dowling Mysteries, Dragnet, and Renegade.

Bralver wrote several screenplays and stories for television series such as Emergency! and Kojak and for the film Midnight Ride (1990). 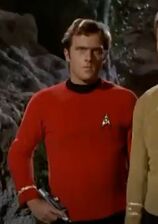 Grant
TOS: "Friday's Child"
No image yet.jpg
Yeoman
TOS: "Is There in Truth No Beauty?"
(uncredited)

Retrieved from "https://memory-alpha.fandom.com/wiki/Bob_Bralver?oldid=2417314"
Community content is available under CC-BY-NC unless otherwise noted.