He doubled Arthur Hill in Owen Marshall, Counselor at Law (1972, with Joseph Campanella), John Forsythe in the television thriller Cry Panic (1974, with Jason Wingreen and Harry Basch), and worked as stand-in and stunt double for William Shatner on The Magician episode "The Illusion of the Queen's Gambit" (1974, with Julian Christopher, Keene Curtis, Brooke Bundy, and Byron Morrow).

Between 1978 and 1982, Harks worked as stand-in for lead actor Bill Bixby on the fantasy series The Incredible Hulk. He also performed stunts in two episodes and appeared as background actor in over forty episodes of the series.

Between 1989 and 1990, Harks was a regular background actor, portraying a Detective, in the science fiction series Alien Nation. He also worked as stand-in on this series and worked with Gary Graham, Eric Pierpoint, Michele Scarabelli, and Ron Fassler. He reprised his role for the television movies Alien Nation: Body and Soul (1995), Alien Nation: Millennium (1996), and Alien Nation: The Udara Legacy (1997) on which he also worked as stand-in. Harks was also a regular background actor and stand-in on the drama series Beverly Hills, 90210 (1992-1994).

Other television and film work as stand-in in the 1990s include the drama Joe Versus the Volcano (1990, with Sidney S. Liufau and Branscombe Richmond) and episodes of Sons and Daughters (1991, with Brooke Bundy and Marj Dusay) and Civil Wars (1992-1993, with Martha Hackett, Jeff McCarthy, Matthew Faison, Wallace Shawn, Jennifer Hetrick, Robert Costanzo, Christopher Collins, Dion Anderson, Natalija Nogulich, and Richard McGonagle). 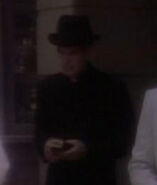 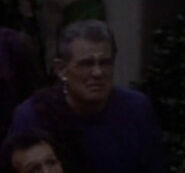 Bajoran civilian
DS9: "In the Hands of the Prophets"
(uncredited)
Add an image to this gallery

Retrieved from "https://memory-alpha.fandom.com/wiki/Bob_Harks?oldid=2413876"
Community content is available under CC-BY-NC unless otherwise noted.