Robert "Bob" Orrison (28 July 1928 – 11 October 2014; age 86) was a Stuntman and Stunt Coordinator who worked as a stunt double and stunt performer on several episodes of Star Trek: The Original Series. He was one of Leonard Nimoy's and DeForest Kelley's stunt doubles and received no credit for his appearances.

Born as Robert P. Orrison in Bakersfield, California, he followed his younger brother George Orrison, who worked as personal stunt double for Clint Eastwood throughout his career, into the stunt business, after he worked as steer wrestler and bulldogger in the rodeos. Orrison was a member of Stunts Unlimited and an inductee in the Stuntmen's Hall of Fame. His two sons, Brad and Mark Orrison were worked as stuntmen.

In addition, Orrison worked as stunt driver for the television series Harry O under stunt coordinator Craig R. Baxley between 1974 and 1975 and performed stunts in episodes of The Immortal (1970, with Alan Oliney, Frank Orsatti, and Charlie Picerni), Mannix (1971), and Alias Smith and Jones (1971).

Between 1979 and 1985, Orrison worked for stunt coordinator Paul Baxley as stunt double for actor James Best on the television series The Dukes of Hazzard along with fellow stunt performers Corey Michael Eubanks, Steve Kelso, Doug Coleman, Henry Kingi, Sr., and Gene LeBell. He was also the main stunt double for actor George Peppard on the television series The A-Team between 1983 and 1987 where he worked with actors Dwight Schultz and Melinda Culea, stunt coordinator Craig R. Baxley and stunt performers Lane Leavitt, Leslie Hoffman, Nick Dimitri, and Bobby Bass.

Among his most recent work are stunts in the comedy The Wedding Planner (2001, with stunts by Merritt Yohnka and Gordon O. Hansen and stunt coordination by Corey Michael Eubanks), the comedy The Animal (2001), the television western The Last Cowboy (2003, stunt coordination by Clint Lilley), and the television crime drama Detective (2005, with stunts by Danny Downey, Caryn Mower, and Jim Palmer). 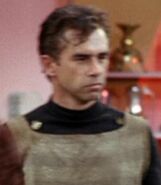 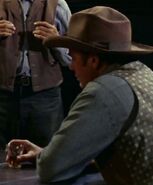 Cowboy
TOS: "Spectre of the Gun"
(uncredited)
Add an image to this gallery

Retrieved from "https://memory-alpha.fandom.com/wiki/Bob_Orrison?oldid=2699407"
Community content is available under CC-BY-NC unless otherwise noted.