Bobby Bass (6 August 1936 – 7 November 2001; age 65) was an extra and stunt double on Star Trek: The Original Series. He regularly played a security officer and engineer and in many other roles. Before entering the acting business, Bass was a Judo champion.

In the episodes "The City on the Edge of Forever", "Catspaw" (and possibly others), he acted as the stunt double for James Doohan.

Engineer/security guard
"Space Seed",
"This Side of Paradise",
"I, Mudd"
(uncredited) 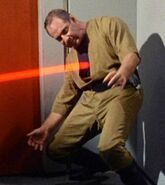 Oscar series android
"I, Mudd"
(uncredited)
Add an image to this gallery

Retrieved from "https://memory-alpha.fandom.com/wiki/Bobby_Bass?oldid=2698562"
Community content is available under CC-BY-NC unless otherwise noted.