Bobby Clark (born 12 February 1937; age 85) is an actor and stunt performer, who appeared in Star Trek: The Original Series.

Clark and fellow stuntman Gary Combs played the Gorn captain in the TOS episode "Arena". Clark also appeared as an actor in at least three other episodes. [1]

38 years after introducing the race in "Arena", Clark, as a guest of stunt coordinator Vince Deadrick, Jr. (whose father had been a fellow TOS stuntman) visited the set of Star Trek: Enterprise episode "In a Mirror, Darkly, Part II" during the shooting of the scenes in which the Gorn made their first live-action appearance since that episode.

In 2009 he appeared in the British television documentary Bring Back... Star Trek in which he reprises his role as the Gorn Captain with show host Justin Lee Collins standing into William Shatner's place in a parody of the famous scene in "Arena".

In 2014 he made a guest appearance as the mirror universe Halkan administrator Tharn in Star Trek Continues E03 Fairest of them All.

In 2016 he appeared in the documentary Star Trek: The Original Series - The Roddenberry Vault. 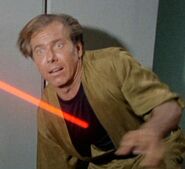