The Bok'Nor had a crew complement of 78, who all died during the destruction of the ship. (DS9: "The Maquis, Part I")

This merchant checked the cargo which was brought onto the Bok'Nor on his PADD. He followed the two officers aboard the ship and died when the freighter exploded. (DS9: "The Maquis, Part I")

This Cardassian was played by an unknown actor, and was described more specifically in the script as "a Cardassian merchant marine-type officer".

These officers carried cargo on board the Bok'Nor and were also aboard when the ship departed from Deep Space 9. They died during the following explosion of the freighter. (DS9: "The Maquis, Part I")

These Cardassian officers were played by unknown actors. 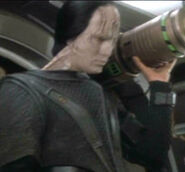 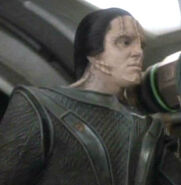 Played by an unknown actor
Add an image to this gallery
Retrieved from "https://memory-alpha.fandom.com/wiki/Bok%27Nor_personnel?oldid=2361464"
Community content is available under CC-BY-NC unless otherwise noted.