Ray Walston
For the member of Species 8472 who impersonated this individual, please see Boothby (Species 8472).
"He's the groundskeeper. One of the wisest men I ever knew."
– Jean-Luc Picard, 2367 ("Final Mission")

Mr. Boothby was a Human male who worked as head groundskeeper at Starfleet Academy in San Francisco on Earth during the 24th century. Born around the 2260s, Boothby worked at Starfleet Academy from about 2321 and saw many promising young cadets come and go, often offering up helpful advice and kind words. Among the cadets he had seen pass through the Academy were such prominent Starfleet captains as Picard, Janeway, Richardson, and Lopez. (TNG: "The First Duty", VOY: "In the Flesh")

Boothby was disdainful of herbicides and other high-tech devices, and preferred to tend to the grounds by hand. After a big parrises squares win in 2324, it took Boothby three weeks to repair the grounds following the celebration. In 2368, Boothby claimed that he was cranky because he had been forced to replant the same flower bed several times. During the mid-2360s the cadet corps Nova Squadron, led by Nicholas Locarno, won the Rigel Cup. According to Boothby, the subsequent celebration at Starfleet Academy made the parrises squares championship celebration of 2324 look like a dinner party. (TNG: "The First Duty")

Picard considered Boothby one of the wisest men he ever knew. (TNG: "Final Mission") Boothby gave Picard a grand tour of the grounds following his arrival at the Academy in 2323. Boothby once caught Picard carving the initials A.F. into his prized elm tree. (TNG: "The Game") Boothby had more faith in Picard than Picard himself. The only thing Picard did which surprised Boothby was pinning a Ligonian within the first fourteen seconds of a wrestling match. At some point, Picard made some mistake that jeopardized his Academy career. Had it not been for Boothby's advice to make the right decision, he might never have graduated. Boothby's suggestion was apparently met with resistance by Picard, and for a time, Picard considered Boothby a vicious and mean-spirited old man and did not speak to him for months. Boothby knew Picard needed to find his bearings. Picard never told Boothby how much he appreciated his help, but Boothby claimed Picard's noteworthy Starfleet career was repayment enough. (TNG: "The First Duty")

During Chakotay's stay at the Academy in the late 2340s, Boothby served as his boxing coach. (VOY: "The Fight")

In the mid 2350s, Boothby brought fresh roses to Cadet Kathryn Janeway's quarters each morning. (VOY: "In the Flesh")

Jean-Luc Picard advised Wesley Crusher to seek out Boothby when he was accepted to the Academy in 2367. (TNG: "Final Mission") Crusher met Boothby his first week there, and he took Crusher on the same tour Picard received over forty years prior. He did not remember Picard at first, but his memory was later jogged and he told Wesley that he was proud of the captain's accomplishments. (TNG: "The Game") Boothby knew all of the Nova Squadron members and realized how much the other cadets revered them. He was shaken by the accident which claimed the life of Cadet Joshua Albert.

In 2368, Picard visited Boothby following the accident. Boothby recognized Picard immediately, and wondered what happened to his hair. At this time, Picard tried to express his appreciation for his advice and guilt over never showing his thanks, but Boothby dismissed his remorse. Boothby also explained to Picard how the other cadets treated Nova Squadron with godlike respect and how Nova Squadron wanted to maintain that image, leading Picard to realize that Cadet Nicholas Locarno may have planned an unorthodox stunt leading to the accident. The USS Enterprise-D personnel subsequently learned that Nova Squadron had been attempting a Kolvoord Starburst. Picard's experience with Boothby was echoed when he confronted Cadet Crusher with the news and threatened to go to the board of inquiry, but Crusher realized he needed to tell the truth himself. (TNG: "The First Duty")

In 2375, Species 8472 established a training facility somewhere in the Delta Quadrant, recreating Starfleet Command, Starfleet Medical, and Starfleet Academy in perfect detail. They intended to instruct members of their species to act as Humans and other Alpha Quadrant species in order to infiltrate the Federation, which they saw as a threat to their existence. The leader of the group took on the role of Boothby, and met Commander Chakotay of the USS Voyager when he transported aboard the facility to investigate it. Captain Janeway later negotiated a cease-fire with the Boothby replicant, where Species 8472 would receive information about the nanoprobe weaponry and the Starfleet crew would be allowed to inspect Species 8472 technology and visit their simulation of Earth. The replicant gave Janeway roses as a parting gift before Voyager left to continue their journey. (VOY: "In the Flesh") 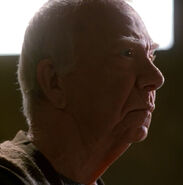 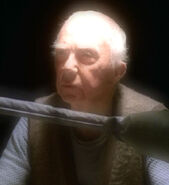 ...and illusion of Boothby

A holographic duplicate of Boothby was part of Chakotay's training simulations aboard the USS Voyager in 2375. The same Boothby from the holoprogram later appeared in a series of hallucinations while in a vision quest induced by a group of aliens trying to communicate with Chakotay telepathically. (VOY: "The Fight")

"Yes, there is. I just wanted to, while I was here. Look, you know as well as I do I would never have graduated if you–"
"You made a mistake. There isn't a man among us who hasn't been young enough to make one."

Boothby was played by actor Ray Walston as well as his photo double Gene Smith in wider shots of the episode "The Fight".

The character was originally mentioned in "Final Mission" but went on to appear in "The First Duty", "In the Flesh" (as a Species 8472) and "The Fight" (as a hallucination and hologram). Michael Piller is cited as "creator" of Boothby. (The Official Star Trek: The Next Generation Magazine issue 21, p. 15)

Of Boothby's first appearance, the script for "The First Duty" describes him as, "an older man with a rumpled appearance and an irascible disposition...he holds a sharp-edged gardening tool in his hand..." [1]

He also appeared in early drafts of Star Trek: Insurrection in flashbacks to Picard's Academy days and in the present. According to Michael Piller, "Ray Walston lost a job he never knew he had." (Fade In: From Idea to Final Draft; [2])

During filming of "The First Duty", the cast and crew of The Next Generation constantly approached Walston with his old My Favorite Martian character's signature schtick of head antenna and finer-wiggling "levitation". (Star Trek: The Next Generation Companion (1st ed., p. 197))

Ronald D. Moore considered having Boothby appear in "Journey's End", with the revelation that Boothby was in fact The Traveler. Michael Piller vetoed the idea as he thought it would cheat Picard by making his mentor Wesley's as well. (Star Trek: The Next Generation Companion (2nd ed., p. 290))

During filming of the episode "In the Flesh", Walston often had trouble with remembering his lines during long one-shot dialogue scenes, but while the cameraman was changing the film for the scene in the briefing room, he stated a line from Hamlet. Robert Beltran then stated the next line, and Walston the next. The two went on for several minutes, amazing the entire cast and crew. Tim Russ remembered in an interview for the special features of the Voyager Season 5 DVD that it was so quiet beside them, you could hear a pin drop, and that when they were done, everyone broke out in applause. [3]

Boothby's distinctive gardeners costume comprising brown dungaree overalls with long-sleeved grey undershirt and distressed straw hat was later sold off in the It's A Wrap! sale and auction for US$700.00. [4] The brown felt vest and blue-grey shirt costume as worn in "The Fight" was sold for US$374.36. [5]

In his review of "The First Duty", Star Trek author Keith R.A. DeCandido loved Ray Walston's portrayal of Boothby, writing, "...the best guest star here is the perfectly cast Ray Walston [...] "It would’ve been easy to drop the ball when finally casting this character so revered by Picard, but instead they absolutely hit it out of the park." [6]

Boothby has been referenced in a number of non-canon works.

The Star Trek: Starfleet Corps of Engineers eBook Aftermath suggests he was born on one of the Martian colonies, a reference to Ray Walston's role in My Favorite Martian.

The novel The Needs of the Many gives his first name as "Liam".

In the Star Trek: The Next Generation - The Space Between comic book An Inconvenient Truth, Captain Picard approaches Boothby to seek his opinion on Admiral Nechayev, suspicious of whether she can be trusted during his investigation of a conspiracy within Starfleet. Boothby tells Picard about the young Nechayev, but is not sure about her trustworthiness. He also tells Picard about whispered rumors he has heard of "people inside Starfleet, a secret group that fights dirty to keep the Federation clean".

The Star Trek: Deep Space Nine - Millennium novel The Fall of Terok Nor reveals that Bajoran Starfleet officer Arla Rees became acquainted with Boothby during her time at the Academy.

Boothby also appears in the Star Trek: New Frontier novel Stone and Anvil, dispensing advice on relationships and careers to a young Shelby.

The video game Star Trek Online has, among others, a plaque commemorating Boothby in Starfleet Academy, which indicates he died in the year 2382. If the player scans all plaques scattered around the Academy grounds, they receive the title of "Boothby's Favorite." The character Elisa Flores mentions that a hologram of Boothby is still maintained on Academy grounds through at least 2409.

This is a featured article. At the time it was last featured (May 2015) it was considered one of the best examples of the Memory Alpha community's work. This article was last featured more than five years ago though, and its status should be reviewed. The links below can be used to check how the article has changed in that time. Original featured revision (116170) • Diff to current • Last featured revision (1716342) • Diff to current • Blurb
Deutsch Español Français
Community content is available under CC-BY-NC unless otherwise noted.
Advertisement