The Borg cube was the primary vessel of the Borg Collective.

Every Starfleet encounter with a single cube resulted in heavy losses. At the Battle of Wolf 359 in 2367, an armada of forty Starfleet ships was assembled to stop a cube; thirty nine of those ships were lost in a matter of minutes. Dozens more were destroyed stopping another cube in the incursion of 2373. (TNG: "The Drumhead"; Star Trek: First Contact) Normally a single Borg cube was capable of assimilating all elements of civilization from an entire planet. (citation needed • edit)

Millions of cubes were estimated to exist in Borg space in the Delta Quadrant; (citation needed • edit) the largest single grouping of cubes directly observed by Starfleet was fifteen, by the crew of the USS Voyager in late 2373. (VOY: "Scorpion") When describing the assimilation of his world, Arturis said that hundreds of cubes surrounded his homeworld before its destruction. (VOY: "Hope and Fear") Seven of Nine stated to Captain Janeway that the nebula concealing the transwarp hub contained at least 47 Borg vessels. (VOY: "Endgame")

Borg cubes were massive in size, measuring over three kilometers across and possessing an internal volume of 27 cubic kilometers. (VOY: "Dark Frontier") In 2366 Commander Shelby estimated that a cube could remain functional even if 78% of it was rendered inoperable due to the decentralized and redundant nature of it's key systems. (TNG: "The Best of Both Worlds") 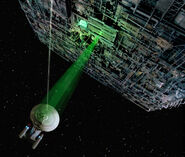 The cubes could also use dispersal fields to disrupt the sensor and transporter function of enemy vessels. (VOY: "Collective") The Borg were capable of transporting through the active shields of both Galaxy and Intrepid-class starships. (TNG: "Q Who")(VOY: "Scorpion")

Borg cubes did not appear to utilize traditional energy shields. Instead, they seemed to employ a subspace electromagnetic field that could be altered to adapt to enemy weaponry. This made destroying Borg vessels exceedingly difficult, as most weapons employed against them tended to either not work at all, or to become completely useless after a few shots. (TNG: "Q Who") This problem could be overcome to a degree by varying the frequency and modulation of the energy of the weapons in question, but even this tended to fail after a short time. (TNG: "The Best of Both Worlds") Explosives, such as photon torpedoes, could also be adapted to with ease. The Borg could similarly adapt their weapons to the technology of their opponent's defenses. During their second encounter with a Borg cube, the crew of the Enterprise-D was able to prevent a Borg tractor beam from locking onto them by rapidly modulating the energy frequency of their shields. However, less than half a minute later, the Borg adapted the energy of the tractor beam to compensate for the rapidly shifting energy of the shields, and all further attempts to use this tactic failed within seconds. (TNG: "The Best of Both Worlds")

Starfleet's two engagements with Borg cubes were extremely costly. In the first case, at the Battle of Wolf 359, the Borg had assimilated Jean-Luc Picard mere hours before and had gained access to his vast knowledge of Starfleet tactics and operations. As such, the battle saw 39 out of 40 ships destroyed with virtually negligible damage to a Borg vessel. The Borg vessel then continued nearly unimpeded to Earth, and was stopped only by the ingenuity of the Enterprise-D's crew. (TNG: "The Best of Both Worlds, Part II") However, a similar engagement a several years later saw a similarly large Federation fleet perform considerably better against another Borg cube. Though it suffered heavy casualties, the fleet managed to inflict heavy damage to the cube's outer hull and cause the vessel's power grid to begin fluctuating. The vessel was eventually destroyed primarily due the intervention of Captain Picard, whose residual telepathic link to the Collective furbished him with knowledge of a (presumably) battle-induced weak spot on the Borg vessel, which was subsequently targeted by the entire fleet. (Star Trek: First Contact)

At least one Borg cube, and possibly others of its class, contained a Borg sphere. The only known recorded purpose of a sphere disengaged from a Borg cube was for escape. The sphere is the only documented support vehicle a Borg cube possessed. (Star Trek: First Contact)

The internal pressure aboard a Borg cube was two kilopascals above what would be normal on a Federation starship. The humidity was on average 92%, and the temperature was at 39.1 °C. (Star Trek: First Contact) The atmosphere contained traces of tetryon particles. (VOY: "Infinite Regress") The infrastructure was made of tritanium, an alloy known for its extreme hardness. (VOY: "Endgame")

Retrieved from "https://memory-alpha.fandom.com/wiki/Borg_cube?oldid=2025539"
Community content is available under CC-BY-NC unless otherwise noted.