Deflector shields, regeneration, ablative hull armor
The Borg long-range tactical vessel, commonly referred to by the Federation as a Borg sphere, was a sphere-shaped starship used by the Borg Collective during the late 24th century.

Borg spheres had transwarp capability and ablative hull armor. They were also equipped with a tractor beam. (VOY: "Drone") Provided its deflector shields were down, a Borg sphere could be destroyed by a Sovereign-class starship with relative ease using quantum torpedoes. (Star Trek: First Contact)

Following the destruction of the cube during the Battle of Sector 001, the Borg launched a sphere in order to travel back to the 2063 and prevent the first globally publicized contact between Earth and the Vulcans. In order to accomplish this, they attempted to kill Zefram Cochrane at his hometown of Bozeman, Montana, but were soon destroyed by the Sovereign-class USS Enterprise, which had followed the sphere back through time. (Star Trek: First Contact)

Debris in the Arctic Circle

At least twenty-two fragments of this sphere's outer hull ended up in the Arctic Circle. In 2153, a team of scientists found the remains of the sphere there. There was enough debris left for the team to determine the ship was a perfect sphere. Unfortunately, they soon discovered that two drones had survived the crash. (ENT: "Regeneration")

In 2375, the crew of USS Voyager successfully retrieved a Borg transwarp coil from a damaged sphere, as part of Operation Fort Knox. At the time, the sphere was only able to travel at warp 2 because it was regenerating from the damage. (VOY: "Dark Frontier")

The return of Voyager

In 2378, Starfleet attempted to destroy a sphere with a fleet of starships. The sphere was holding Voyager, which was able to destroy the sphere from the inside using transphasic torpedoes. (VOY: "Endgame")

A sphere had no living quarters nor a discernible engineering section for the propulsion systems. There was, however, a primary shield generator inside the shield matrix. The several transwarp coils of a sphere were contained inside specialized rooms called transwarp chambers that featured heavy shielding. (VOY: "Dark Frontier")

A schematic of a Borg sphere

USS Voyager caught in the tractor beam of a Borg sphere

The interior core of a Borg sphere

Interior view of another section of the Sphere

Interior corridor of a Borg sphere 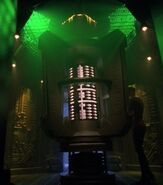 The transwarp drive of a Borg sphere

A Borg sphere was mentioned for the first time in the first draft script for Star Trek: First Contact, dated 29 September 1995, where scene 4 described an apparently more belligerent and independently operating sphere thus; "A huge, spherical Borg warship as it takes a phaser shot from an unseen vessel. The BLAST smashes into the Borg Sphere, but the massive ship continues. The Sphere returns FIRE." In the movie as featured, however, the sphere was ultimately primarily depicted as an escape vessel for the Borg Queen, though its original aggressive nature was not altogether abandoned, as the vessel was seen bombarding 21st-century Earth, before being destroyed by the USS Enterprise-E. [1]

At one stage while the Borg sphere was being designed, it was conceptualized as measuring 3,000 feet (914 meters) in diameter. The design team that worked on Star Trek: First Contact finally decided it was meant to be only 1,500 feet (457 meters) in diameter, as shown in the film's official size comparison chart. (Star Trek: The Magazine Volume 1, Issue 23, pp. 54 & 50) However, according to the size of the debris field, as referenced in ENT: "Regeneration", the radius was calculated at "about 600 meters in diameter."

One of the first ideas Mike Sussman had for the episode "Regeneration" was that some technology had survived from the Borg sphere in Star Trek: First Contact, and had somehow been appropriated by one of the designers who had participated in the Warp Five program. From that, Brannon Braga retained the idea that debris from the Borg sphere had survived. (Star Trek: The Official Starships Collection, issue 99, p. 16)

While "Regeneration" was proceeding to develop, Mike Sussman wanted to establish that Borg spheres weren't constructed in some type of complex but were instead transformed from other ships following assimilation of each of those vessels. Sussman was also interested in having the transport ship Arctic One become a Borg sphere during the course of the episode. However, these concepts were rejected. (Star Trek: The Official Starships Collection, issue 99, p. 16)

In the final draft script of "Regeneration", the debris from the Borg sphere was initially described as, "A JAGGED HULL FRAGMENT twenty or thirty feet high, jutting out of the ice at an odd angle. The metal is heavily damaged, covered with snow and ice... it's obviously been here for a very long time. Smaller pieces of debris are buried in the glacier around it. As we'll learn, this is debris from a BORG SPHERE that crashed in the Arctic Circle almost a century ago."