Brett Jones is a stuntman who worked on several episodes of Star Trek: Voyager and performed stunts in Star Trek Into Darkness. A shirt worn by Jones in an episode of Voyager was sold off on the It's A Wrap! sale and auction on eBay. [1]

For the third season episode "Warlord", Jones is listed as stunt double for Robert Duncan McNeill during the prison escape scene, scene 66, on the call sheet for Tuesday 3 September 1996 along with Michael Papajohn and Dennis Madalone. However, the same scene was finally filmed on Tuesday 10 September 1996 and Jones was replaced by Christopher Doyle who ultimately was not seen in the final aired episode. 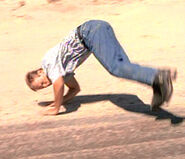 Retrieved from "https://memory-alpha.fandom.com/wiki/Brett_Jones?oldid=2414600"
Community content is available under CC-BY-NC unless otherwise noted.