Brian Ciari is a former actor who appeared in at least two episodes of Star Trek: The Next Generation. His costume from the episode "Schisms" was later sold off on the web. [1]

Beside his work on Star Trek, Ciari also appeared in Mercedes Benz commercials, several soap operas, and in a featured role as an ambulance paramedic in the 1987 comedy Throw Momma from the Train, with Kate Mulgrew, Raye Birk, and Karen Westerfield.

Since 2001 he is owner of Ciari Enterprises, an Wholesale automotive company in Thousand Oaks, California. 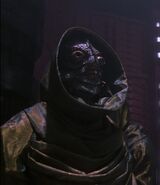