Multiple characters
Brian Markinson (born 14 September 1961; age 59) is an actor who appeared in four episodes of the three Star Trek spin-off television series Star Trek: The Next Generation, Star Trek: Deep Space Nine and Star Trek: Voyager. He was cast as Sulan for "Faces" prior to portraying Pete Durst in the episode immediately prior to it, "Cathexis". (Beyond the Final Frontier, p. 200) Markinson had previously auditioned for the roles of The Doctor[1] and Neelix. [2]

Markinson has also guest-starred in The X-Files (with Dey Young), The Dead Zone (with Nicole de Boer, David Ogden Stiers and Bill Mondy), and Stargate SG-1.

Markinson and Voyager co-star Robert Duncan McNeill became friends years later when they were reunited on the TV series "Girlfriend's Guide to Divorce", in which Markinson acted and McNeill directed.[3] 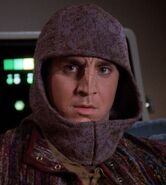 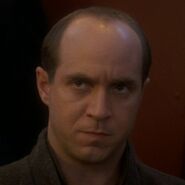 Elias Giger
DS9: "In the Cards"
Add an image to this gallery

Retrieved from "https://memory-alpha.fandom.com/wiki/Brian_Markinson?oldid=2698290"
Community content is available under CC-BY-NC unless otherwise noted.