Brian Simpson (born 18 August 1965; age 54) is a stuntman, stunt actor, and stunt coordinator who performed stunts in several episodes of Star Trek: Deep Space Nine and Star Trek: Voyager. He received no credit for his appearances.

Simpson has doubled for actors such as Michael Caine and Steven Segal and is a member of the Screen Actor's Guild and a long time member of the International Stunt Association.

Simpson was one of the stunt doubles for Kevin Peter Hall's Predator in the action films Predator (1987) and its sequel Predator II (1990). He performed stunts in Joel Schumacher's academy award nominated thriller the Client in 1994 and served as stunt double for William O. Campbell in the science fiction thriller Menno's Mind in 1997. Michael Dorn, Corbin Bernsen, Robert Picardo, Rosine "Ace" Hatem, Anita Hart, and Denise Lynne Roberts also performed in this film. Simpson was Daniel Baldwin's stunt double in Fallout (1998) and The Pandora Project (1998, alongside Tony Todd) and was one of the stuntmen in the creature costume of Godzilla (1998).

Simpson was also one of the stunt performers in the CGI fantasy film Beowulf alongside Paul Eliopoulos and Mike Smith and has filmed scenes for Indiana Jones and the Kingdom of the Crystal Skull (2008) and the action film G-War (2009) in which he performed alongside Denney Pierce and Jimmy Ortega under the coordination of Doug Coleman. 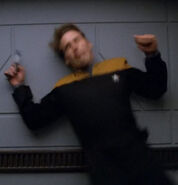 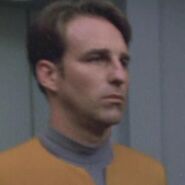 Retrieved from "https://memory-alpha.fandom.com/wiki/Brian_Simpson?oldid=2516090"
Community content is available under CC-BY-NC unless otherwise noted.