You may also be looking for actor Bryan Thompson.

Brian Thompson (born 28 August 1959; age 62) is an actor from Ellensburg, Washington who appeared in several episodes of Star Trek: The Next Generation, Star Trek: Deep Space Nine and Star Trek: Enterprise, as well as in Star Trek Generations. His costume from the episode "Rules of Acquisition" was sold off on the It's A Wrap! sale and auction on eBay. [1]

He made his big screen debut in 1984 with a small role in The Terminator (with Dick Miller, Paul Winfield, and Earl Boen).

He is probably best known in his role as the alien bounty hunter from The X-Files. His other TV credits include guest spots on Falcon Crest, Charmed and Buffy the Vampire Slayer. He appeared as Eddie Fiore in the short lived TV series Kindred the Embraced along with Jeff Kober, and as an eccentric Florida sheriff on the short lived TV series Key West, that also starred Denise Crosby, T.C. Carson, Geno Silva, Leland Crooke and Jennifer Barlow. He is also one of the many actors who have appeared in both the Star Trek and Babylon 5 franchises, guest-starring in an episode of the spin-off series Crusade with Daniel Dae Kim. He has also had numerous roles in films ranging from Cobra (1986, with Andrew Robinson, Roger Aaron Brown, Laura Drake, Leslie Morris, and Kurt V. Hulett) also that year the period comedy Three Amigos with Tony Plana, Alien Nation (1988, with Earl Boen, Jeff Kober, Roger Aaron Brown, Leslie Bevis, Keone Young, Tom Morga, and Frank Collison), Moon 44 (1990, with Malcolm McDowell and Leon Rippy), Ted and Venus (1991), Dragonheart (1996, with Dina Meyer and Jason Isaacs), Mortal Kombat: Annihilation (1997, with Musetta Vander), and Joe Dirt (2001).

Thompson has a long history with Star Trek, having appeared in three series and one film, as two Klingons, a Dosi, a Jem'Hadar, and a Romulan. 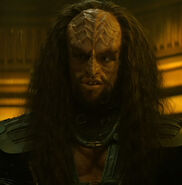 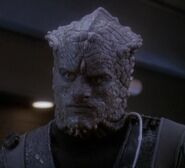 Toman'torax
DS9: "To the Death" 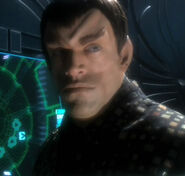