Multiple characters
Brita Nowak (born 17 January 1968; age 54) is a former actress who worked as first and second unit stand-in and occasional photo double for Jeri Ryan during the late fourth season until the end of Star Trek: Voyager. [1] She took over this position from Cameron beginning with the episode "Hunters". Her first Star Trek role however was in the fourth season episode "Scientific Method" as the dying crewmember on the bridge. She filmed this scene on Wednesday 30 July 1997 on Paramount Stage 8 and is listed as "Dying Starfleet" on the call sheet.

Nowak and J.R. Quinonez were the only regular stand-ins who were rarely featured in front of the camera. Beside working as stand-in for a number of guest actresses, Nowak can also be seen as a Voyager officer in the movie theater end scene of the seventh season episode "Repression" where she was sitting behind Roxann Dawson and Robert Duncan McNeill. She filmed this scene on Thursday 10 August 2000 on location at the Gower Theater on the Paramount Pictures lot. For the episode "Author, Author", Nowak filmed her sickbay scenes on Friday 26 January 2001 on Paramount Stage 9. Nowak also appeared as one of the Ba'ku villagers in Star Trek: Insurrection.

Born in East Berlin, East Germany, Nowak attended the Karl-Marx-Oberschule in Stralsund between 1974 and 1979, the POS V in Wittstock Dosse between 1979 and 1984, and the EOS Käthe Kollwitz in Prenzlauer Berg, East Berlin between 1984 and 1989 and moved to the United States following her graduation. [2] She made her television debut in 1993 with a featured role in the L.A. Law episode "Rhyme and Punishment" which also featured Corbin Bernsen and Cristine Rose.

Other acting work includes different background roles in several episodes of Babylon 5 including as a Minbari in 1996 and in JAG. Nowak was the stand-in for Jenna Elfman on the 1998 comedy Krippendorf's Tribe. This film also featured Stephen Root, Barbara Williams, David Ogden Stiers, Tim Halligan, and Penny Johnson.

Since 2004, Nowak is the owner and driver of the transportation company BratCat Express Corp. located in Jupiter, Florida. [3] 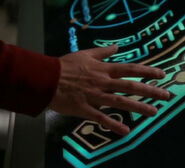