Bruce French (born 4 July 1945; age 75) is a veteran actor who has appeared in three different Star Trek series as well as Star Trek: Insurrection. Hailing from Reinbeck, Iowa, French is a graduate of the University of Iowa, where he majored in Speech and Theater. He has been married to actress Eileen Barnett since 1991. He was also born on the same day and same year and "The Drumhead" co-star Earl Billings.

French has more than fifty years of film and television appearances to his credit. He has held recurring roles on such series as Dallas (1981-1982, working with Susan Howard, Leigh J. McCloskey, William Smithers, and Morgan Woodward) and Ally McBeal (2001, co-starring Albert Hall). He is known as Father Lonigan in the NBC daily soap Passions (1999-2008, starring McKenzie Westmore) and portrayed Jim Burns in the crime series The Riches (2007-2008) where he worked with regulars Todd Stashwick and Gregg Henry. In 1981, he supplied the voice of various characters in the Star Wars Radio Drama (With Brock Peters, David Clennon, Keene Curtis, and Jerry Hardin).

Further film work includes the mystery comedy Dark and Stormy Night (2009, with Jim Beaver and Daniel Roebuck), the television drama The Wishing Well (2009, with Sally Kellerman), the short drama Justify the Means (2009), the comedy Beginners (2010, with Christopher Plummer and Rodney Saulsberry), the drama Beautiful Boy (2010), and the short comedy It's a Horrible Life (2010). 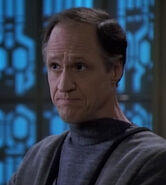 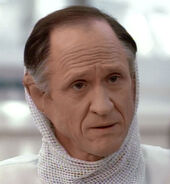 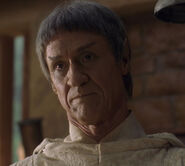 Vulcan Elder
ENT: "The Andorian Incident"
Add an image to this gallery

Retrieved from "https://memory-alpha.fandom.com/wiki/Bruce_French?oldid=2416951"
Community content is available under CC-BY-NC unless otherwise noted.