He is legally blind, having lost over 90% of his eyesight to childhood cancer. [1]

Horak has been performing on stage for over 25 years, having appeared in numerous productions in Canada, the United States, and Europe. His stage credits include an award-winning role in Evil Dead: the Musical and his original one-man show, Assassinating Thomson, in which he creates a painting live on stage.

He has also been active as a painter since 2011, exhibiting his work in various venues.

His only screen credits prior to his role in Strange New Worlds were the 2009 short film Glitch and a guest appearance in a 2010 episode of Warehouse 13, which starred Saul Rubinek and featured Mark A. Sheppard and Dana Jones. 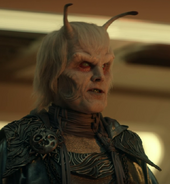