Bruce Mars (born 23 October 1935; age 86) enjoyed a short and unremarkable career between 1965 and 1969 – but two of his appearances were in different Star Trek: The Original Series episodes. He made a total of three movie appearances and about a dozen television guest spots. His most memorable Trek performance is without doubt Finnegan, a recreation of the abusive cadet who made Kirk's academy life miserable, and whom Kirk later encountered on the Shore Leave Planet in recreated form.

Mars was originally considered for the role of Dave Bailey in "The Corbomite Maneuver", but Anthony Call got the part instead. (These Are the Voyages: TOS Season One) His name was seen on a list of extras for the same episode (as a Crewman), but his character was not seen on screen.

He filmed his scenes as Finnegan between Wednesday 19 October 1966 and Wednesday 26 October 1966 on location at Vasquez Rocks Natural Area Park and Africa USA.

Mars was a male model in the mid-to-late 1950s before his acting career. Before that, he was an athlete and appeared in the 1954 Olympic trials for track. Besides Star Trek, he appeared in guest spots on a few television series, including two episodes of Voyage to the Bottom of the Sea: "Killers of the Deep" with Michael Ansara and Dallas Mitchell and "The Abominable Snowman" with Bart La Rue, written by Robert Hamner, and directed by Robert Sparr. He also appeared in "Massacre", an episode of The Time Tunnel, starring James Darren, Lee Meriwether, and Whit Bissell. The episode was written by Carey Wilber, directed by Murray Golden and co-starred Paul Comi, Lawrence Montaigne, and Perry Lopez.

Mars left the acting business in 1969, to become a monk in the Self-Realization Fellowship under the name "Brother Paramananda". 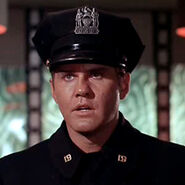