Budd Albright (born 18 August 1936; age 84) is an actor who appeared in two episodes of Star Trek: The Original Series and worked as a body double in a third one.

As an actor, he appeared in episodes of The Lively Ones (1962) and McCloud (1972) as well as in TV movies like The Lonely Profession (1969) and Drive Hard, Drive Fast (1973, starring Joan Collins and featuring Joseph Campanella). In those TV movies he also provided stunts. Among his feature films are Lad: A Dog (1962) and The Reluctant Astronaut (1967).

He was a stunt performer on movies such as What Did You Do in the War, Daddy? and Beau Geste (with Malachi Throne, Victor Lundin, Mario Roccuzzo, Gary Combs, Chuck Couch, Robert Herron, Robert F. Hoy, and stunt coordination by Hal Needham, both 1966), First to Fight and Tobruk (with Lawrence Montaigne, Bob Hoy, Paul Baxley, Gil Perkins, and Paul Stader, both 1967), Ice Station Zebra (1968), Patton and There Was a Crooked Man... (both 1970). 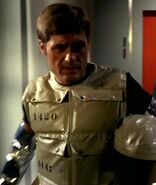 Rayburn
"What Are Little Girls Made Of?"

Body double for William Shatner
"What Are Little Girls Made Of?"
(uncredited)
Add an image to this gallery

Retrieved from "https://memory-alpha.fandom.com/wiki/Budd_Albright?oldid=2698509"
Community content is available under CC-BY-NC unless otherwise noted.