Burt Nacke is an actor turned videographer who appeared as a background actor in several episodes of Star Trek: The Next Generation.

Between 1989 and 1990, Nacke worked as stand-in on the television series Nasty Boys, starring Craig Hurley. 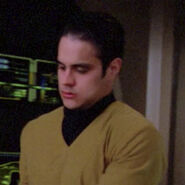 Retrieved from "https://memory-alpha.fandom.com/wiki/Burt_Nacke?oldid=2414433"
Community content is available under CC-BY-NC unless otherwise noted.