She is probably best known for playing the role of Na'Toth in the first season of Babylon 5, a role taken up by Mary Kay Adams for two episodes in season two. Andreas Katsulas and Bill Mumy co-starred with her. Brown reprised the role for one episode of season 5 and played a Human lawyer, Guinevere Corey, in the second season episode "There All the Honor Lies" written by Peter David.

She also made guest appearances on several other shows, including Beverly Hills 90210 (1999, with Cari Shayne), Sliders (1999), JAG (1996 and 2000, with Rif Hutton and Kamala Lopez-Dawson in the latter one), Becker (1999, co-starring Terry Farrell), and Law & Order: Criminal Intent (2005). More recently she portrayed Tammy Tennis in the horror comedy All About Evil (2010) which also features fellow Trek performers Thomas Dekker, Jack Donner, and Zachary Culbertson.

Today, Brown is working as agent for other actors such as Katee Sackhoff, Christopher Judge, Michael Shanks, and Tom Skerritt. 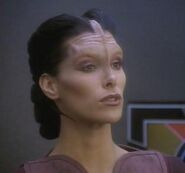 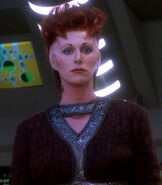 Retrieved from "https://memory-alpha.fandom.com/wiki/Caitlin_Brown?oldid=2713594"
Community content is available under CC-BY-NC unless otherwise noted.