Cameron (born 27 September 1953; age 68) is the actress who portrayed Ensign Kellogg during the last four seasons of Star Trek: The Next Generation and in two Star Trek films. Born Roberta Jean Oppenheimer, she is known only by "Cameron" professionally, and credited as such in all her Star Trek-related appearances. In addition she played some other background parts like a Cardassian, a Klingon and a Prytt. Cameron was also the second unit stand-in and photo double for Gates McFadden's Doctor Beverly Crusher, when McFadden's first unit stand-in Lorine Mendell was unavailable in episodes such as "The Perfect Mate" in which Mendell stood in for guest actress Famke Janssen, in "The Nth Degree", "The Host", "The Game", and "New Ground". She also worked as stand-in for several guest actresses including Gwynyth Walsh in the episodes "Redemption" and "Redemption II".

On Tuesday 27 May 1997, Cameron auditioned for the stand-in part for Seven of Nine actress Jeri Ryan on Star Trek: Voyager along with six other actresses. She was cast and first worked as stand-in for Ryan on Friday 30 May 1997 on Paramount Stage 8 during the production of the fourth season episode "Scorpion, Part II". She also stood-in occasionally for guest stars but left the production of Star Trek: Voyager in the mid-fourth season. She was replaced by Brita Nowak. In addition, she appeared as a Trill officer on the promo photo for Star Trek: The Experience for which she was photographed on 6 October 1995. She also reprised her role as Kellogg for the video sequence "Klingon Encounter".

According to the call sheets, Cameron filmed scenes (scene 40 and 81) for the TNG fourth season episode "Night Terrors" on the bridge and in a corridor. These scenes were cut from the final episode. Cameron was also scheduled to be part of the security team in the cave scenes in the fifth season episode "Silicon Avatar" and in Ten Forward scenes in the episode "Cost of Living" but did not appear. Her costume from the seventh season episode "Attached" was sold off on the It's A Wrap! sale and auction on eBay. [1] Parts of her Klingon costume from the episode "Redemption" were also worn by Spice Williams in Star Trek V: The Final Frontier and by Gabrielle Union in the Star Trek: Deep Space Nine episode "Sons and Daughters". This costume was later also sold off on eBay. [2]

As a child Cameron produced and created her own shows in her family's garage and had the dream to be a show star. Years later she portrayed such characters in Las Vegas shows including Les Folies Bergere and The Moulin Rouge and earned the title "Showgirl of Showgirls". [3](X)

In addition she was a set security officer for the film Oh, What a Night (1992) and a stand-in and stunt performer in Quentin Tarantino's Pulp Fiction (1994). Also in the early '90s, she did a promotional tour for Star Trek: Deep Space Nine where she portrayed the Bajoran officer Kira Nerys alongside fellow Star Trek background performers Tracee Lee Cocco (as a Ferengi), Joycelyn Robinson (as Ensign Gates), and Michael Braveheart (as a Klingon). In 1998 Cameron was featured in the US magazine Celebrity Sleuth, having a four page article and pictorial under the headline "The Space Girls: Posh Space" (Vol. 11, Iss. 6, p. 54-57).

In 2003 Cameron created the burlesque show "Cameron's Bump and Grind" on which she worked as writer, producer, director, seamstress, set painter, carpenter and lead actress portraying the show star Crystal Divienne. She reunited with several old friends to create this show including Antonio whom she met on the set of The Next Generation. [4](X) 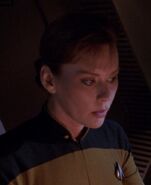 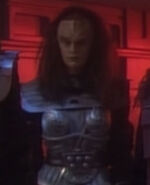 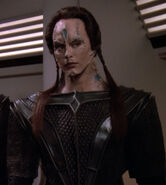 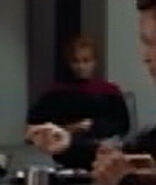