ISBN 0743539621 (CD)
ASIN B000I0HDW0 (Audible)
Captain's Glory is a Pocket TOS novel – the third and final novel in the Totality trilogy – written by William Shatner with Judith & Garfield Reeves-Stevens. Published by Pocket Books, it was first released in hardback in August 2006.

From the book jacket
With the civil war on Romulus averted, Kirk is finally free to seek out the truth behind the death of his oldest and closest friend. Was Spock killed by the shadowy organization known as the Totality? A generous offer from Starfleet provides him with the starship he needs in order to reach his goal. Their only proviso: that they can call on his help if they need him. But what happened to Spock is not Kirk's only worry: Joseph, his son, is rebelling wildly against the restrictions placed on him as the price of Romulan peace. Is the Totality somehow also linked to Joseph's rage? But before he can find the answers to either troubling question, Kirk receives a call from Admiral Janeway, telling him she needs him to save the Federation. Torn between his mission and his duty, the cause of the Federation must claim him one more time before he can turn his attention either to his friend or to his son.

Pop culture icon William Shatner returns with another breathtaking Star Trek adventure in which both generations must battle an unstoppable enemy for the existence of all life in this galaxy – and beyond. 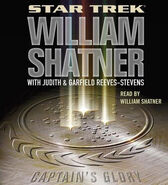 Early version of the cover

The novel refers to events in the following episodes and movies: