The vast majority of Central Command personnel under the rank of legate wore the same type of uniform. The uniform featured a heavy, triangular chest piece, as well as padded armor on the lower arms and the outside of the legs.

Standard elements of the uniform included a disruptor pistol holster and a wrist communicator. A division strip on the right side of the chest displayed information on the affiliation of the individual.

The "division strip" gets its name from the It's A Wrap! sale and auction. It was attached to the chest piece with Velcro, so the same uniform could be used to display different strips. [1] [2] The exact nature of what the strips represented is not known.

The earliest known example of this type of uniform dates to the 2340s and 2350s aboard Terok Nor. (DS9: "Wrongs Darker Than Death or Night", "Things Past") They were also worn in the late 2350s by soldiers based at the Gallitep labor camp. (DS9: "Duet")

These uniforms were created out of necessity, due to the complicated design of the "Type B" uniform and the foreseen heavy recurrence of the Cardassian uniform. (Star Trek: Deep Space Nine Companion (p. 138)
Designer Robert Blackman appreciated the fact he could reuse the same Cardassian costumes on Star Trek: The Next Generation and Star Trek: Deep Space Nine. "We did 12 Cardassian suits for the [DS9] pilot 'Emissary'," he remarked, "and then we got to use 11 of them on The Next Generation." (Cinefantastique, Vol. 23, No. 6, p. 43)

The legates of the Central Command, the highest ranks within the organization, could opt to wear a more decorated variant of the standard uniform. While still very utilitarian, Legates could be identified by the seal they wore of the Cardassian Union on the left of their breastplate. 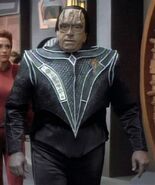 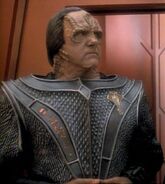 A legate's uniform without breastplate, 2371
Add an image to this gallery

While not typical, the breastplate could be accentuated with silver white lining on the chest with a more elaborate division strip on the right side, as was worn by Legate Parn. (DS9: "The Maquis, Part II")

These uniforms could also be worn with a belted holster and wrist communicator.

With the introduction of the "Type A" uniform, the decision was made in casting John Schuck as Legate Parn for "The Maquis, Part II" to introduce a Cardassian with an atypical physique. "We were afraid the Cardassians were all becoming too alike," says Ira Steven Behr. "We wanted to see a kind of pear-shaped Cardassian, just to show that they're not all alike." With that, according to Robert Blackman, a series of modifications, which included losing the foam used in the design of the revised Cardassian uniforms, allowed for them to "be adjusted to a body like John Schuck's, although that's about as far as they go." (Star Trek: Deep Space Nine Companion (p. 137-138); Star Trek: Costumes: Five Decades of Fashion from the Final Frontier (p. 200))
Damar's costume was sold as part of the It's A Wrap! sale and auction. For the auction, it was described as follows: "The costume top is made of cast latex to be worn over a Spandex jumpsuit with stirrups that go inside rubber boots which include cast latex gaiters. Also included is a cast holster for a Cardassian disruptor pistol on a belt that fastens at the waste and around the thigh. Additionally a metal and resin "Legate" badge is included to fasten on the latex top as well as a cast "wrist communicator" that attaches via Velcro." [3]
The bodysuit worn under the chest piece was also sold as part of It's A Wrap! sale and auction, and was described as "a dark-grey, long-sleeved jacket featuring multiple sites of black piping, ribbing under the collar, down the ribs, and along most of the sleeve. Included are matching overall-style trousers with similar ribbing down the leg, stirrups for the feet, and a corresponding, molded rubber holster and belt." It also noted that "Most Cardassian uniform costumes consist of material sewn over neoprene; this costume is rare in that it consists merely of more sturdy, moderately metallic material." [4]

This type of uniform was worn by Cardassian warship personnel in 2367 and 2368, including those in the Cardassian militia. (TNG: "The Wounded", "Ensign Ro")

This black uniform with blue triangular accents was worn by the security chief of Terok Nor during the 2360s, specifically Thrax and Odo. (DS9: "Things Past")

According to the script, this attire was described as a "uniform that seems neither fully civilian nor military, but some mixture of both."
Two of these costumes were sold as part It's A Wrap! sale and auction. The first auction description stated that "[t]he jacket is made of neoprene with navy blue ribbed fabric covering the arms and torso. On the front and back are 'V' formations made of navy suede with quilted centers. There is a zip up the back. The corresponding trousers are navy blue." [5] While the second auction description stated that this costume, worn by a stunt double, "is long-sleeved, neoprene-lined, dark-blue jacket with a textured, several triangular accents on the chest, the innermost featuring a lighter, iridescent pattern, a zip down the back, matching, overall-style trousers, and stirrups for the feet." [6]

These guard uniforms were less heavily built uniform than the military, and lacked a chest piece. Instead, the guard uniform consisted of a grey jumpsuit with padded sections along the legs and torso. The uniform also included gauntlets that protect the lower arms and wrists.

Worn in 2370, these individuals answered directly to a Cardassian officer, who in turn, answered to the Chief Archon. They may have been associated with the Bureau of Identification. (DS9: "Tribunal")

Both of these uniforms only appeared in "Tribunal" and were sold as part of It's A Wrap! sale and auction. The first auction description stated that it was "made up of a gray jumpsuit with black dot accents and ribbing running from the arms down the legs. Also included is a pair of gaiters made from rubber with a gray rubber covering to match the costume for 'alienizing' boots." [7] While the second auction description stated that the uniform is a "gray vinyl jumpsuit [that] has pleats up the sides and small checks on the sleeves and upper torso. [..] Worn around the forearms are gray covered neoprene gauntlets." [8]
Retrieved from "https://memory-alpha.fandom.com/wiki/Cardassian_uniform?oldid=2716555"
Community content is available under CC-BY-NC unless otherwise noted.