Cathy DeBuono (born 20 March 1970; age 52) is an actress who appeared in the last three seasons of Star Trek: Deep Space Nine as dabo girl M'Pella as well as in several other background roles. She also worked as stand-in, photo double, and body double for Terry Farrell. DeBuono received no on-screen credit until her final appearance in the episode "The Dogs of War".

DeBuono, who has Italian roots, was born in Yonkers, New York and grew up in Bronxville, New York. As an athlete she started a career as a successful volleyball player and received several awards and medals such as two gold medals at the United States Olympic Festival in 1991 and 1992. Between 1988 and 1991 she attended the University of Kentucky on a full athletic scholarship for volleyball, played middle blocker and broke several records during her active playing days.

DeBuono started her acting career after she performed in a stage play directed by a former student, Ashley Judd, and was forced to end her career as a volleyball player because of a knee injury. She studied at the American Academy of Dramatic Arts and graduated in 1994. In 2003 she earned a master degree in clinical psychology from Antioch University. DeBuono resides with her wife in West Hollywood. Today, DeBuono is also working as a licensed marriage and family therapist in California. She has a weekly web blog called What's Your Problem? since 2008 and more recently started a highly rated radio show called Cathy Is In. [1]

Other television series she was involved in include the comedy series Jenny (1997, episode A Girl's Gotta Spike), The Pretender (1998, episode Collateral Damage, with Steven Anderson, Stefan Gierasch, Jay Karnes, Daniel Dae Kim, and Adrian Sparks), Pacific Blue (1998, episode Heat in the Hole, with James G. MacDonald), the action comedy Martial Law (1999, episode Big Trouble, with Tom Wright and Troy Brenna), the comedy series Becker (2003, episode Amanda Moves Out) on which she also served as stand-in and photo double for Terry Farrell, the comedy series Exes and Oh's (2007, pilot episode with Randy Mulkey), and two episodes of 3Way (2008, along with Liz Vassey in the previous one).

DeBuono also appeared in a few films, including the short project Gay Propaganda (2002) and the award-winning Out at the Wedding (2007), the romantic comedy And Then Came Lola (2009), and the short drama Tremble & Spark (2009). She tried "new frontiers" for the short film The Touch (2007) by Jane Clark, on which she worked as associate producer and still photographer. As an out lesbian, DeBuono is involved in several gay and lesbian projects and charities. She uses her MySpace page as a vehicle to publicize her efforts.

More recently she portrayed the leading role of Dyna in the comedy series We Have to Stop Now (2009-2011), currently in its second season, for which she also worked as executive producer. In development for 2011 is the crime comedy Slate and Kelly, based on the web series for which she'll play the leading role of Slate. Michael Dorn will also portray a character in this film, Captain Bishop. Beside her acting part DeBuono will be credited as co-creator and producer.

Most recent credits are the short film Bounty (2011), the drama Meth Head (2011, with Marcelo Tubert), and the drama A Perfect Ending (2011, with Gary Weeks and Terrence Beasor). 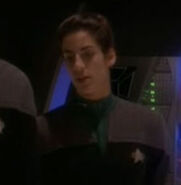 Starfleet officer
DS9: "Trials and Tribble-ations", "A Simple Investigation", "Behind the Lines"
(uncredited) 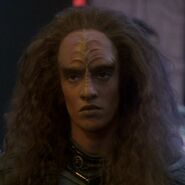 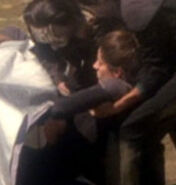 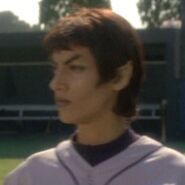