A landing party of Sulu, Scott and crewman Jackson is overdue for routine check in, when Jackson finally answers the ship's urgent hails. His confusing message: one to beam up. And, when Jackson materializes, he immediately falls to the floor, dead. But his dead lips speak; a sonorous voice tells Captain Kirk his ship is cursed; he must leave or all will die.

"Captain’s log, stardate 3018.2. Crewman Jackson is dead... and there are no apparent physical causes. Mr. Scott and Mr. Sulu are still out of touch on the planet below. Leaving Assistant Chief Engineer DeSalle in command of the Enterprise, I'm beaming down to the planet's surface to find my two missing crewmen... and discover what killed Jackson."

With two crewmen missing and a mysterious death, Kirk doesn't plan to leave yet. He organizes a second landing party: himself, Spock, and McCoy. They beam to the point from which Jackson was beamed up. There, Kirk intends to discover what happened to his missing men, and what killed Jackson.

The planet is fogbound, something extremely unlikely given the environmental conditions. Proceeding towards a reading of nearby lifeforms, the landing party encounters three witches; the spectral hags again warn Kirk to leave. Winds and fog try to thwart the landing party, but they discover a large castle – the source of the lifeform readings. Entering, the landing party spies a black cat, and follows it through the corridors, until the floor collapses beneath them, plunging them down to a dungeon chamber, and unconsciousness.

Awakening, the landing party discovers they are chained. Scotty and Sulu appear, and Kirk is at first relieved to see his missing men. Then he realizes they're marching to someone else's drum: alive, but unresponsive and no longer allies. The two enthralled men free Kirk, Spock, and McCoy, and herd them towards the door at phaser point; a brief scuffle is halted when the all the men are suddenly – elsewhere, in the presence of a strange robed man.

This is Korob, decked out in wizard's finery, with robe, wand, and black cat. Spock's comment that mapping expeditions have not discovered lifeforms on Pyris VII wrings a small truth from Korob – that he is not native to this world. Korob first plies the crew with food and drink, then with fortunes in gemstones. All to get them to leave, without asking more questions. But Kirk tells Korob he could manufacture such stones by the ton on his ship; they're valueless, a fact that conflicts with whatever research Korob has done. Korob then reveals that the events were staged to test the landing party. He has learned they are loyal, brave, and incorruptible.

Sylvia enters. She tells Kirk that she can read and control the minds of men. Kirk briefly overpowers Scotty, seizing his weapon, and when he refuses to return it, Sylvia reveals another skill: she can perform sympathetic magic. A small model of the Enterprise, held in the flame of a candle – and the real ship, orbiting above, begins to grow hot.

Seizing Sylvia's arm, Kirk removes the model from the flame, and the Enterprise from danger. When he suggests that landing parties will soon appear, Korob seals the model in a block – and above, the ship is suddenly surrounded by a field unlike anything ever encountered, a field that doesn't come from anywhere, but just... is. And, it cannot be analyzed.

Kirk and Spock are returned to the dungeon, while McCoy remains with Sylvia, who intends to question him. Kirk and Spock spend some time speculating about Sylvia and Korob, and Kirk decides they must be stopped. Their questions and interest seems to him a little too sinister.

Elsewhere, Sylvia and Korob argue; Sylvia likes her new sensations. Wherever these aliens call home, they have nothing like it – and she intends to remain here. Korob reminds her they have a duty to the Old Ones, a fact she considers unimportant in light of her new infatuation.

Kirk is returned to Sylvia's presence, where he learns she is infatuated with him, as well. She reveals her plan: to dispose of Korob and join with Kirk. But Kirk is using her, gaining answers through manipulation. Among other things, he learns that the transmuter is the key to her power, a mechanism that facilitates the actualization of thought. But she discovers the deception, and has Kirk hauled back to his cell.

Korob finds Kirk and Spock; he reveals he has released the Enterprise, and he releases them. He also reveals that he can no longer control Sylvia or her pawns, and that he considers her dangerously irrational. He is regretful, offering his opinion that their visit could have been a peaceful one. Time presses, and he cannot explain in detail; instead, he urges the men out of their cell, where they again encounter the black cat – now grown to enormous size. The men are forced to retreat back into their cell.

The cat forces the door of the cell, crushing Korob and giving Kirk an opportunity to retrieve his wand. Escaping through the ceiling, Kirk and Spock are confronted by their own enthralled crew, and a brief scuffle ends with Sylvia's pawns out of action, and the reappearance of the cat, as well as Sylvia. The wand Kirk has retrieved is the transmuter, and Sylvia wants it very badly. She transports Kirk into the main hall and tells him to give her the transmuter. She informs him that she has a less powerful, and simpler mechanism; that it's Korob's wand which holds the key to their power. Sylvia is reluctant to simply seize the device from Kirk, despite her contention that he does not know how to use it. Finally, she threatens Kirk with a phaser, demanding the wand. Kirk responds by shattering the wand, an act that undoes everything... almost everything. At the landing party's feet, two small aliens wither and fall. Deprived of their transmuter, Sylvia and Korob have resumed their real forms, and are as Sylvia described them: feathers in the wind a life form that is totally alien to their universe. They quickly perish, and both landing parties return to the Enterprise

"Three witches, what appears to be a castle and a black cat.
"If we weren't missing two officers and a third one dead I'd say someone was playing an elaborate trick-or-treat on us."
"Trick or treat, captain?"
"Yes, Mr. Spock. You'd be a natural. I'll explain it to you one day."

"Mr. Chekov, recalibrate your sensors. If you need help –"
"I can do it, sir. I'm not that green.

- Kirk catching himself after seeing a skeleton in chains next to Dr. McCoy

"Where did your race get this ridiculous predilection for resistance, hmm? You examine any object. You... you question everything. Is it not enough to accept what is?"

"Jackson, the crew member who returned to the ship – you wondered what killed him. I made an image of him. In the essence of my thoughts, the image was Jackson. And when I killed the image, and knew that it was dead, he died!"
"You can't think a man to death."

- Sylvia and Kirk on sympathetic magic

"Maybe we can't break it, but I'll bet you credits to navy beans we can put a dent in it!"

- DeSalle, determined to free the Enterprise

"I can squash you! And that would be an interesting sensation, yes."

- Sylvia, asserting her power over Korob

"Tell me about power, captain. How does it feel?"

- Sylvia, as she becomes aware of Kirk's duplicity

"You will be swept away. You, your men, your ship, your worlds!"

"Captain, a little more alacrity, if you please"

"You're very clever, Captain – more so than I'd imagined. Clever, resourceful, and handsome."
"Don't let her touch the wand, Captain."

- Sylvia and Spock, as she approaches Kirk and the transmuter

- McCoy and Kirk, after seeing Sylvia and Korob die

"Catspaw" was the eighth episode of the remastered version of The Original Series to air, premiering in syndication on the weekend of 28 October 2006. Aside from the standard remastering of the effects used for the USS Enterprise, the most notable revised features include new effects shots of Pyris VII, as well as the castle on the surface, with the original shot of the castle entry completely retained as part of the full building. The transmuter effect was also touched up and most of the visible wires controlling the Ornithoid lifeforms were removed. 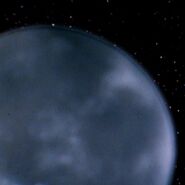 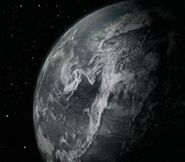 ...and the remastered counterpart.

...and the remastered counterpart expanded to include the entire castle.
Add an image to this gallery

The next remastered episode to air was "The Trouble with Tribbles".

Retrieved from "https://memory-alpha.fandom.com/wiki/Catspaw_(episode)?oldid=1071426"
Community content is available under CC-BY-NC unless otherwise noted.