Centurion' was a military officer rank, common in many cultures.

The rank was used by the ancient Romans on Earth. Roman centurions would occasionally be put in charge of patrolling the various Roman provinces.

In 2369, Richard Galen compared Jean-Luc Picard, who was on a survey mission, to a "Roman centurion patrolling the provinces, maintaining a dull and bloated Empire." (TNG: "The Chase")

The Romulan Star Empire also used the rank of centurion. A crew member of the Romulan Bird-of-Prey that destroyed several Earth outposts along the Earth-Romulan Neutral Zone in 2266 was a centurion. (TOS: "Balance of Terror")

Captain Kirk infiltrated a Romulan ship as a centurion in order to steal its cloaking device in 2268. (TOS: "The Enterprise Incident")

According to The Making of Star Trek (p. 256) the Romulan rank of centurion is the generic rank of all officers.

Bochra held the rank of centurion in 2366. (TNG: "The Enemy") Another centurion served as a guard aboard the IRW Khazara under Commander Toreth in 2369. (TNG: "Face of the Enemy")

According to a deleted lines from the script for "The Enemy", upon learning Bochra's name, Lieutenant Commander Geordi La Forge quipped, "And you're a centurion. Well, stay with it, you'll be a commodore someday." Bochra fired back with, "I'm not certain of the equivalent Federation rank… but I do know it's higher than lieutenant commander. 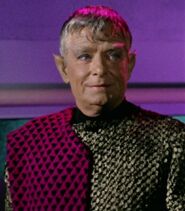 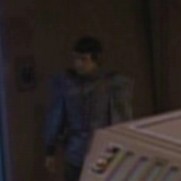 Tarent, a Romulan Free State centurion in 2399
Add an image to this gallery

Retrieved from "https://memory-alpha.fandom.com/wiki/Centurion?oldid=2524648"
Community content is available under CC-BY-NC unless otherwise noted.