Chancellor of the Klingon High Council

The succession of a chancellor could be determined in different ways, one of them being the Rite of Succession. If the incumbent died peacefully, a pre-determined Arbiter of Succession would initiate the Sonchi ceremony to confirm the death of the previous chancellor. The arbiter would then name the two strongest challengers for the title. By the mid-24th century this proclamation was a mere formality, while in previous time the ja'chuq ceremony had to be performed by the challengers to demonstrate their worthiness. The details of the Rite could be chosen by the arbiter alone. At some point the two designated challengers were to begin personal combat, with the victor becoming the new chancellor. (TNG: "Reunion")

An alternate way of succession was an individual challenging the incumbent to personal combat. This could happen anytime, even during a war, but had to be based upon the challenger's claim that the incumbent had acted dishonorably and was no longer fit to lead the High Council. If the challenger defeated the incumbent, he immediately became the new chancellor, but could also hand the office to someone the victor considered more worthy. (DS9: "Tacking Into the Wind")

The chancellor was protected at all times by the Yan-Isleth. (DS9: "Apocalypse Rising")

Kol-Sha attempted to seize the Chancellorship from L'Rell in 2257. While he forced L'Rell to sign a document legalizing the taking through using her newborn child for blackmail, she was able to defeat him and his warriors with the assistance of Section 31 agent Philippa Georgiou before the action was made public. A cover story was then created, which stated that Kol-Sha died to protect L'Rell. (DIS: "Point of Light")

In the late 23rd century, the chancellor wore the Klingon Chain of Office. (Star Trek VI: The Undiscovered Country)

When K'mpec died in 2367, he was the longest ruling chancellor in Klingon history. (TNG: "Reunion")

The chancellor remained the head of government of the Klingon Empire even after a new emperor was installed (as head of state) in 2369. (TNG: "Rightful Heir";DS9: "Apocalypse Rising") 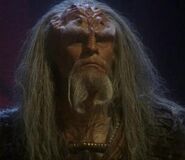 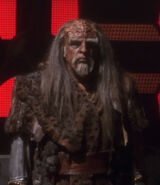 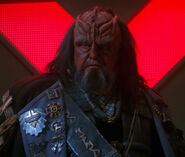 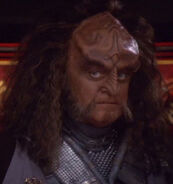 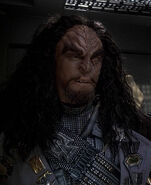 The concept of the Klingon Empire having a chancellor was introduced in Star Trek VI: The Undiscovered Country before being reused in several episodes of Star Trek: The Next Generation, Star Trek: Deep Space Nine, and Star Trek: Enterprise, as well as a singular reference in VOY: "Flashback". In the script for Star Trek VI, the term is used interchangeably with president.

While played by different actors, the two unnamed chancellors from Enterprise had similar cranial ridges and hair. It is possible production crew intended for them to be the same person. Additionally, it is possible that one (or both) of these chancellors were M'Rek, since they were not addressed by name.

Azetbur apparently succeeded Gorkon without undergoing a lengthy Rite of Succession; this might have been due to Gorkon being killed by non-Klingon enemies. According to the novelization of Star Trek VI: The Undiscovered Country he had expected something to happen to him and had used his influence to ensure Azetbur would succeed him.

While Kol was not explicitly referred to as chancellor in Star Trek: Discovery, he was described as the leader of the Klingon Empire and as having formed a new [Klingon High] Council.

Non-canon sources, like the novels The Art of the Impossible, Serpents Among the Ruins, and Harbinger, list other chancellors such as Sturka (β), Kaarg (β), Ditagh (β), and Kravokh (β). The video game Star Trek Online depicts Martok being supposedly killed in 2393 by a councilor called J'mpok (β), who then advanced to take the position of Chancellor. J'mpok later declares himself Emperor and initiates another Klingon civil war, until he is killed in battle, and later succeeded by a clone of L'Rell.