Charles Dennis (born 16 December 1946; age 73) is an actor, playwright, novelist and songwriter from Toronto, Canada who appeared in two episodes of Star Trek: The Next Generation and Star Trek: Enterprise. His costume from his The Next Generation appearance was sold off on the It's A Wrap! sale and auction on eBay. [1] In addition, Dennis voiced the character Surok in the 2013 Star Trek video game.

As an actor, Dennis made his feature film debut in an uncredited role in the 1970 war epic Patton. The film also featured Larry Dobkin. He went on to appear (again, uncredited) in the 1982 film Visiting Hours, starring William Shatner. Since then, he has only appeared in a handful of films and television shows, as his primary calling is writing plays and novels. 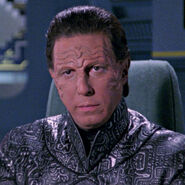 Retrieved from "https://memory-alpha.fandom.com/wiki/Charles_Dennis?oldid=2417795"
Community content is available under CC-BY-NC unless otherwise noted.