Masterson originally auditioned to play the role of Mardah, Jake Sisko's girlfriend in the episode "The Abandoned". She was originally told that the age difference between Cirroc Lofton and herself would have made the relationship improbable. Avery Brooks (who directed the "The Abandoned") has subsequently indicated at conventions that he felt Masterson was too sexy to play Jake's girlfriend and that he hoped she would be introduced as a different, regular character at a later date – possibly as a love interest for Sisko. The role of Leeta was subsequently created for Masterson as a one-episode character, but the producers were so impressed with Masterson's performance that they wrote the character into "Facets", and subsequently decided to add her to the list of recurring characters. (Star Trek: Deep Space Nine Companion (p. 238))

She commented: "I’ve had the privilege of being on some shows that were highly acclaimed for their effects but still have incredible stories, which of course is the most important thing. That balance obviously doesn’t always happen. I don’t like or watch films that are primarily effects-based, but they certainly have a place in the market, a huge audience. The stronger the effects are in a film, the stronger, more intricate, the story has to be, or it can get blown away. Being on DS9 probably spoiled us because the writing was truly some of the best ever on television. Ira Steven Behr, Ron Moore, Rene Echevarria, Hans Beimler and of course Michael Piller are some of the best writers in the business, because they have such a wide range of ability, sensitivity and creativity in both comedy and drama. It’s rare to find a show that covers the bases as DS9 did. Not everyone knows this, but we were the #1 syndicated show in the world when we closed. And from everything I’ve heard, the resurgence of DS9 on DVD and on Spike is bringing a new audience to the show, ironically, years after we closed. After 7 years. it’s great to see such a worthy piece finding the audience that it deserves". [1]

In 2010, Masterson lent her voice as a holographic Leeta for the video game Star Trek Online and can still be found at the dabo table in Quark's on DS9, along with other dabo tables found throughout the game. This hologram mentions various canon-inspired references, including her "missing Rom". In 2015, Masterson returned to Star Trek Online to voice mirror universe Leeta, and again in 2018 to reprise the original Leeta as part of the Victory is Life expansion. She most recently lent her voice again in 2021 as mirror Leeta.

In 2012 Masterson guest voiced Peggy Brooks opposite Tom Baker's Doctor in the Big Finish Productions Doctor Who audio drama Night of the Stormcrow. During the recording she was offered the role of bounty hunter Vienna Salvatori in The Shadow Heart, another Doctor Who audio, this time starring Sylvester McCoy. Her role was so well received that Masterson's character was spun off into her own audio series, Vienna, beginning with a pilot episode in 2013 and running for four seasons up to 2018. Masterson also played Maddie Price in seasons one and three of Big Finish's audio adaptation of cult 1970s British sci-fi series Survivors.

Recent projects include a starring role opposite Kipleigh Brown (Jane Taylor from Star Trek: Enterprise) in the film Yesterday Was a Lie and a guest role as Sherry in "The Nuclear Man" (a 2015 episode of The Flash), as well as the upcoming announced film R.U.R. 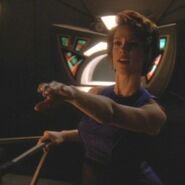