The chief medical officer (CMO), first medical officer, senior medical officer, or ship's surgeon was a senior staff-level position, typically held by a lieutenant commander or commander who was a doctor of medicine with surgical skills. A nurse could also hold this position if no qualified doctors were available. (TAS: "The Lorelei Signal")

Chief medical officers were also referred to as the "ship's surgeon" in the 23rd and 24th centuries. (TOS: "The Man Trap"; DS9: "Shadows and Symbols")

Some noted chief medical officers in Starfleet history were:

The Starfleet of the alternate reality established in 2233 by the temporal incursion of the Romulan Nero had one noteworthy chief medical officer: 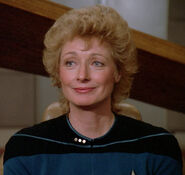 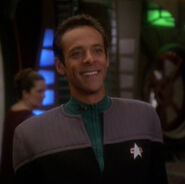 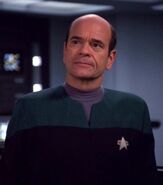 Doctor Leonard McCoy
Add an image to this gallery

Chief medical officers have held a variety of ranks. They could hold any rank in the lieutenant grades, but were quite often seen as lieutenant commanders. Chief medical officers were eligible to take the Bridge Officer's Test for promotion to full commander. At this point, they were considered capable of assuming command of a starship. (TNG: "Thine Own Self") In light of that, their primary duties remained the crew's physical well-being, and several chief medical officers have been civilians with no clear role in the ship's chain of command outside their medical duties. (Star Trek: Voyager; Star Trek: Enterprise)

CMOs aboard a starship or starbase were directly in charge of the sickbay or infirmary, commanding medical department personnel and activities. The CMOs' primary duties were the oversight and maintenance of the overall health and physical fitness of crew and passengers. Furthermore as standard medical procedure, the CMO had full medical authority over any patient officially admitted into their care in their facility, including superior officers, until they were formally released from care.

Officers likely to be assigned as the CMO over long-duration missions of exploration had scientific training in disciplines outside of medicine, allowing them to take on major, extended research projects, or to better participate in a wider variety of encounters. (TOS: "The Immunity Syndrome"; TNG: "Clues", "Suspicions")

In addition to the normal duties of an officer, Starfleet Order 104 Section C gave CMOs the power to relieve an officer or crewman, including a superior one, of their duties if in the CMO's professional judgment, the officer in question was medically unfit. The CMO in question would need to officially certify and provide evidence of unfitness at a subsequent board of inquiry. (ENT: "Hatchery"; TOS: "The Doomsday Machine") Typically, the CMO was expected to have the support of a senior command officer or detailed medical documentation to justify this course of action. (TOS: "The Doomsday Machine"; TNG: "Lonely Among Us"; VOY: "Year of Hell, Part II")

The chief medical officer was able to impose medical physicals upon crewmembers if the mission lasted more than two weeks. (VOY: "Memorial")

The CMO also seemed to have the authority to order officers to do things that would be beneficent to their health, like sleeping. (TNG: "Violations")

In the 23rd century, chief medical officers certified the health of research personnel on alien planets on a yearly interval. (TOS: "The Man Trap")

In an alternate timeline on stardate 51425, The Doctor cited Starfleet Medical Regulation 121, Section A in an attempt to relieve Captain Kathryn Janeway of her command. She refused his order, stating that he had no way to actually "implement this protocol". He countered, by saying that he would note the incident in his official log, and that it could lead to her general court martial. (VOY: "Year of Hell, Part II")

Retrieved from "https://memory-alpha.fandom.com/wiki/Chief_medical_officer?oldid=2444591"
Community content is available under CC-BY-NC unless otherwise noted.