The Chin'toka system was a Cardassian system located near the Federation border. This system contained four planets, two of which (Chin'toka II and III) were habitable and formed a binary pair. It was the scene of two major confrontations in the Dominion War. This system was located in the Alpha Quadrant.

During the Dominion War, the subspace relay AR-558 was established on a small planet in this system by the Dominion.

At the end of 2374, the system was protected by only five squadrons of Jem'Hadar attack ships because the rest had been diverted to reinforce Dominion forces along the Romulan front. This vulnerability provided an opportunity for Allied forces to launch an invasion of Cardassian space. However, the Cardassians had anticipated their attack and deployed hundreds of orbital weapon platforms in the system. These platforms nearly turned the battle against the Allied forces, until a way was found to neutralize them. Subsequently, the system fell to Allied forces (see: First Battle of Chin'toka). (DS9: "Tears of the Prophets")

However, the invasion did not proceed further than Chin'toka as was hoped; the victorious Allies remained bottled up in the system, fending off constant Dominion attacks. (DS9: "Image in the Sand", "The Siege of AR-558")

A Dominion counterattack on the system in early 2375 was halted, although the forces of the Romulan Star Empire suffered heavy losses. (DS9: "Shadows and Symbols")

The Chin'toka system remained under Allied control for most of 2375, until it was retaken by a combined force of Dominion and Breen warships. An Allied attempt to repel their advance ended disastrously, in which 311 of 312 ships were destroyed with relative ease. This was due to Allied unpreparedness for the Breen energy dampening weapon, which rapidly disabled the fleet, leaving all affected ships completely defenseless (see: Second Battle of Chin'toka). The Allies retreated from the system. (DS9: "The Changing Face of Evil", "When It Rains...") 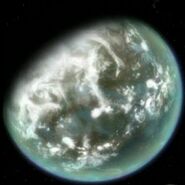 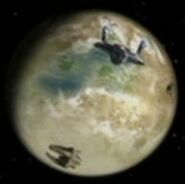 The two planets and a large moon surrounded by weapon platforms

A close-up shot of a tactical map in the beginning of "When It Rains..." shows the position of the Chin'toka system in relation to Ferenginar, Starbase 375, Cardassia, Bajor, and the Badlands. The Chin'toka system was labeled by the AR-558 relay in the map.

A scene cut from "Tears of the Prophets" would have shown that Miles O'Brien came up with the idea to attack Chin'toka, over such alternatives as the Torg'Q system or the Ventani system. The last time he was on a patrol on that part of the border, he had noticed the warp signatures of the ships there to have been changed, suggesting the signatures might have been faked. Garak then suggested ships from the system might have been sent to the Romulan front, leaving the system less defended then previously thought.

According to Star Trek: Star Charts (p. 36) and Stellar Cartography: The Starfleet Reference Library ("Federation Historical Highlights, 2161-2385"), the primary of the Chin'toka system was a G-class star.

Retrieved from "https://memory-alpha.fandom.com/wiki/Chin%27toka_system?oldid=2424969"
Community content is available under CC-BY-NC unless otherwise noted.