Chris "C.S." Violette (born 29 May 1981; age 38) is a Canadian actor who played Transporter officer Britch Weeton in the Star Trek: Discovery first season episodes "The Vulcan Hello" and DIS: "Battle at the Binary Stars", as well as his Mirror Universe counterpart in "Despite Yourself". He is best recognized by Power Rangers fans for playing Schuyler "Sky" Tate, who was the Blue Ranger, later the Red Ranger, in Power Rangers SPD. 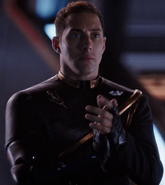 Britch Weeton
DIS: "Despite Yourself"
Add an image to this gallery

Retrieved from "https://memory-alpha.fandom.com/wiki/Chris_Violette?oldid=2416144"
Community content is available under CC-BY-NC unless otherwise noted.