Christian R. Conrad (born 17 September 1964; age 55) is an actor who portrayed three different roles in four episodes of Star Trek: Deep Space Nine and Star Trek: Voyager. Because of his background in stuntwork, Conrad performed his own stunts in these episodes.

During the 1980s, Conrad often worked alongside his father, Robert, and brother, Shane, in various television projects. He first appeared in the 1984 TV movie Hard Knox, written by and starring his father. Besides Christian and Shane, Bill Erwin and Alan Ruck were also among the movie's cast. Two years later, the Conrads starred in another TV movie, Charley Hannah. In 1988, Conrad played the role of Matt Hawkes on the short-lived family adventure series High Mountain Ranger. He reprised the role a year later for another short-lived series, Jesse Hawkes. Both of these series also starred Shane and Robert Conrad and were produced by Conrad's sister, Joan. Robert Conrad also directed for both series; Joan Conrad directed for the former.

By the 1990s, Christian Conrad had ventured out on his own. He appeared in the 1991 TV movie An Inconvenient Truth and the 1994 film Last Time Out. The latter also starred Star Trek: Deep Space Nine guest actress Gail Strickland.

Following his appearances on Star Trek, Conrad could be seen in three episodes of L.A. Heat, a series which featured Kenneth Tigar in the cast. 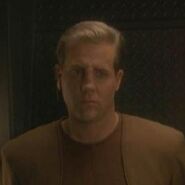 Brilgar
DS9: "The Darkness and the Light"

Alien miner
VOY: "Homestead"
Add an image to this gallery

Retrieved from "https://memory-alpha.fandom.com/wiki/Christian_R._Conrad?oldid=2418680"
Community content is available under CC-BY-NC unless otherwise noted.