She was born in Enfield, Greater London, to a Chinese father and an English mother. After the separation of her parents, she moved to the small town of Longridge with her mother and five siblings. She started dancing at the age of four, and at 14, she gained a place at the Italia Conti Academy of Theatre Arts in London, graduating five years later. After an injury cut her career short in musical theatre, she moved to New York City to study at the Lee Strasberg Theatre and Film Institute.

Returning to England, she appeared in supporting roles in the spy comedy Johnny English Reborn and the drama W.E. both in 2011. On television, she appeared in a 2011 episode of Doctor Who, two episodes of the crime series Whitechapel, and "The Waldo Moment", a second season episode of the anthology series Black Mirror, alongside David Ajala. 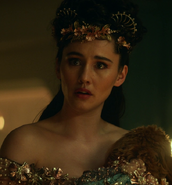