Christopher "Chris" Doohan (born 28 June 1959; age 61) is one of the sons of Montgomery Scott actor James Doohan. Chris and his twin brother, Montgomery, made uncredited appearances as background extras in the first Star Trek feature, Star Trek: The Motion Picture. They can both be seen among the Enterprise crewmembers gathered for Kirk's briefing of the V'ger threat.

The 2009 DVD box release Star Trek: Original Motion Picture Collection featured a reunion of fan extras in the "Special Star Trek Reunion", including Doohan, David Gerrold, Bjo Trimble, Jo Ann Nolan, and Fred Bronson chatting on the same sound stage used for the rec deck scene. [1] During this chat, Doohan mentioned his connection to J.J. Abrams' Star Trek and that the fitting reminded him of the days in 1979.

Upon hearing that his late father's role of Montgomery Scott would be recast for J.J. Abrams' Star Trek, Chris' dad's fans started a campaign asking fans to write to Paramount Pictures in an attempt to persuade the studio and the filmmakers to allow either him or his brother, Montgomery, to play their father's role in the film. At the very least, however, they would have liked to be extras in the film as they were for The Motion Picture. [2]

The role of Scotty in the new film went to British actor Simon Pegg, but on 5 November 2007 it was announced that Christopher Doohan had auditioned for a "minor speaking role" in the film. Doohan stated he would not have even won an audition had it not been for the support of the fans. [3] In January 2008, it was announced that Doohan had indeed won a role in the new film. [4] He appeared alongside Scotty, assisting him in operating the transporter controls during the mission to the Narada (stating on Twitter that his character was alternate reality counterpart to Kyle).

With the announcement of Star Trek Into Darkness, fans once again began a campaign to bring him back to the Enterprise. It was announced on IMDb that Chris would play a transport officer in the film. It was also announced on Trekmovie.com that Chris received a speaking role in the new film, and that Simon Pegg was instrumental in making that happen. This would make Chris Doohan and Leonard Nimoy the only two actors to be in both the first Star Trek film, Star Trek: The Motion Picture and Star Trek Into Darkness. [5]

In 2012, outside the official Star Trek franchise framework, it was announced that Chris Doohan would play his father's character, Scotty, in the upcoming fan film series Star Trek Continues. The first episode, Pilgrim of Eternity, premiered at the Phoenix Comicon to a crowd of over 3,500 fans. With most of the cast in attendance, they signed posters in the lobby, which took almost three hours to complete. [6] As of 2014, his has become a regular role in the ongoing series. He also voices Scotty in Star Trek Online, with a major appearance in the "Agents of Yesterday" expansion pack released in July 2016.

In daily life, Chris Doohan is a Registered Vascular Technologist. Chris competed in a televised talent show known as Your Big Break in 1999, in which participants must impress a studio audience by impersonating the musical celebrity whom they most look or sound like. Doohan emulated country singer Garth Brooks on the show, which was produced and aired by NBC. 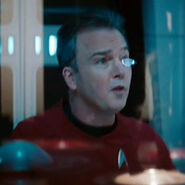 Retrieved from "https://memory-alpha.fandom.com/wiki/Christopher_Doohan?oldid=2663444"
Community content is available under CC-BY-NC unless otherwise noted.