Cindy Griffo Sorensen (born 11 September 1961; age 58) is an actress who worked on Star Trek: The Next Generation, Star Trek: Deep Space Nine, and Star Trek: Voyager. In addition to her work on-screen she was a recurring stand-in for child actors including Michelle Horn in the Deep Space Nine sixth season episode "Tears of the Prophets". An image of Sorensen and fellow stand-in Clynell Jackson III from this episode can be seen on page 131 in the reference work Star Trek: Action!.

She also appeared in television series such as Evening Shade (1994) and The Norm Show (1999, with Nikki Cox) and has been married to fellow actor Joseph Griffo. 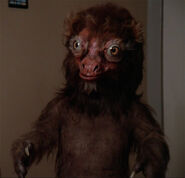 Retrieved from "https://memory-alpha.fandom.com/wiki/Cindy_Sorensen?oldid=2419088"
Community content is available under CC-BY-NC unless otherwise noted.