Jake Sisko
Actor Cirroc Lofton (born 7 August 1978; age 43) played the regular role of Jake Sisko on Star Trek: Deep Space Nine. While Lofton was a regular cast member throughout all seven seasons of Deep Space Nine, he only appeared in 71 of its 173 episodes.

Cirroc Lofton lives in Culver City, California and in 2011 married longtime girlfriend Sarah, but they divorced in 2015. Together they have a daughter. [2]

Interviewed for the documentary What We Left Behind, Lofton stated that Avery Brooks treated him not only like his television son, but like his real-life son, a relationship that has continued since the series ended.

Lofton was cast in 1992 for the role of Jake Sisko. Lofton is the youngest person ever to appear as a regular on a Star Trek series. He was only 14 years and a few weeks old when he filmed his first scenes for the DS9 pilot, "Emissary".

During the run of Deep Space Nine, Lofton reflected about being African-American and the negative aspect of working in Hollywood: "I've been patted down. It's almost like a way of life – it's nothing new for me or my friends. The worst thing is you can get used to it. Sometimes they won't let me on the Paramount lot. One time I lost my employee card, and they were harassing me: 'Well, do you work here?' – and this is the fifth season now. I've been working there since I was 14! It really irritates and annoys me that I'm being harassed only because I'm a kid of color. And there's no doubt about that". (Vibe Magazine 1997)

Although he watched the original Star Trek series and was a fan, Lofton prefers The Twilight Zone. [3](X)

He also appeared in the fan series Star Trek: Renegades and the subsequent Renegades, which followed the same basic premise, but had its overt Star Trek-theme removed due to legal complications. Both again featured a number of other Star Trek-alumni, including Walter Koenig, Terry Farrell, Robert Beltran, Nichelle Nichols, Gary Graham, Aron Eisenberg, Manu Intiraymi, Tim Russ, Hana Hatae and Tracee Lee Cocco.

As a child, Lofton appeared in 1989 in the educational program Econ and Me. During the run of DS9, he voiced two characters in the 1993 television movie The Magic Paintbrush, which also featured John Rhys-Davies and Robert Ito. He also appeared in 1996 in an episode of Moesha and in two episodes of Smart Guy in 1997 and 1998.

Two years after DS9 ended, he guest-starred in 2001 as Anthony Carter in the Soul Food episodes "Nice Work if You Can Get It" and "Come Back for the Comeback". The former episode was directed by LeVar Burton and starred James Avery as a relation of Lofton's character. Vanessa Williams was a regular on this series.

In 2003, he guest-starred in an episode of 7th Heaven, starring Star Trek film actors Catherine Hicks and Stephen Collins. In 2006, he appeared in the TV series Invasion, alongside fellow DS9 star Armin Shimerman and Star Trek: Voyager guest star Ivar Brogger. The following year, he made an appearance on CSI: Miami.

He recently appeared in a 2018 episode of All American.

Prior to DS9, Lofton appeared in the 1992 movie Beethoven. After the end of DS9, in 2004 he performed in the motion picture Fronterz. He then had a role in the 2008 independent feature I'm Through with White Girls (The Inevitable Undoing of Jay Brooks), starring Star Trek: Enterprise's Anthony Montgomery in the title role. The same year, he appeared in Ball Don't Lie. 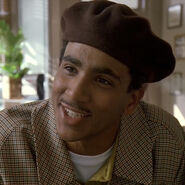