Balok, Grady, Muk, Creepy Orion
Clint Howard (born 20 April 1959; age 63) is an actor who guest starred in four Star Trek episodes across four series. There is an interval of 51 years between his first role and his latest role.

He is the brother of actor and director Ron Howard, and the son of actor Rance Howard. Clint's career began at the age of one, with a role in The Andy Griffith Show, a television show that starred his brother. He has worked steadily since, with roles in a number of the films his brother directs. He also has performed roles in a number of B-movies, such as the 1986 film The Wraith, which has since become a cult classic.

On Comedy Central's August, 2006 roast of William Shatner, Howard reprised his role as Balok in an older, grown-up form addicted to tranya.

He filmed his scenes as Balok on Wednesday, 1 June 1966 at Desilu Stage 9. He also filmed a makeup test the previous day. [1]

On May 5, 2009, Howard appeared on an episode of the television show Fringe written by J.J. Abrams and Alex Kurtzman, three days before the premiere of the Abrams-directed and Kurtzman co-written film Star Trek. Howard played paranoid conspiracy theorist Emmanuel Grayson, who believed he was the son of Sarek and feared an invasion by Romulans from the future (foreshadowing the plot of the film). Grayson's apartment was #1701 and he shared his surname with Spock's mother.

He has also appeared in the drama Frost/Nixon (2008, with Antony Acker, Andy Milder, Geoffrey Blake, Ned Vaughn, and Googy Gress) and the science fiction film Solo: A Star Wars Story (2018). 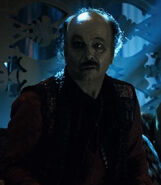 Creepy Orion
DIS: "Will You Take My Hand?"