In 2002 he was nominated for a Taurus World Stunt Award for hardest hit in the film The Animal. He has doubled for stars such as Jimmy Smits. He is the son of stuntman and horse wrangler Jack Lilley and the brother of stuntman Clay M. Lilley. Like his father he is also a professional horse wrangler ans specialized in riding stunts and together they run "Movin' on Livestock", a company that supplies horses and animals for films. 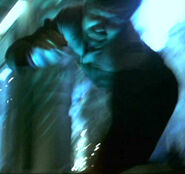