Senior Starfleet bridge officers used specialized command consoles to access and control many functions of the ship's critical computer systems. These consoles were designed in several different formats specific to each ship's bridge layout, but all were located near, and sometimes attached to, the command chair.

Travis Mayweather tries out the original flip-up console in 2151

On NX-class starships of the United Earth Starfleet, the bridge command console was built into the centrally-located command chair. The original chair's armrests had both physical buttons and a flip-up digital control panel; the controls provided access to multiple ship functions, including the shipboard intercom, docking arm control, and the torpedo firing system. (ENT: "Fight or Flight", "Cold Front") A replacement chair was included in a fleetwide upgrade in 2154, which had two banks of lighted buttons instead of the original touch panel. (ENT: "Borderland", "Affliction")

Like the NX-class starships of the previous century, Constitution-class starships had a set of command consoles built directly into the command chair. In the 2250s and 2260s, the consoles had a built-in companel, several buttons and toggle switches, and a gooseneck-style viewer to the right. (TOS: "The Cage") The gooseneck viewer was eliminated by 2266, but the other console controls remained. (TOS: "The Corbomite Maneuver")

After the refit of the 2270s, the dual command consoles were replaced by smaller, adjustable panels which could be moved over the commanding officer's lap for stability during turbulence. (Star Trek: The Motion Picture) The consoles were removed entirely by 2287. (Star Trek V: The Final Frontier) 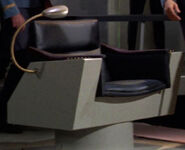 The original command console with gooseneck viewer in 2254

The revised consoles, part of the chair restraints in the 2270s

Despite many aesthetic and design differences found in the alternate reality, Constitution-class vessels had command consoles built into the bridge command chairs, much like their prime reality counterparts of the same timeframe. (Star Trek)

James Kirk in the USS Trainer simulator's command chair, with armrest consoles, in 2258

James Kirk sits in the USS Enterprise's command chair in 2258, with built-in consoles
The USS Trainer simulator was a re-use of the USS Kelvin bridge set.

On most Galaxy-class bridges, two command station, each flanking the command chair, had access to specialized consoles to access sensor data and to monitor starship operations. These freestanding consoles, designed with rotating display screens, were generally used by the ship's first officer, ship's counselor, or other senior officer occupying one of the stations. (TNG: "Encounter at Farpoint", "Clues", "Timescape")

The main command chair had two built-in consoles, which were programmed in a variety of functions, including a system to record entries to the ship's log, library computer access and retrieval, viewscreen control, intercoms, backup conn and ops panels, plus armament and shield controls. (TNG: "Encounter at Farpoint") Originally designed as flip-up consoles which could be hidden when unused, the chair was redesigned in 2365 to integrate the consoles directly into the armrests. (TNG: "The Child") 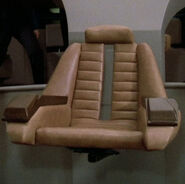 The command chair in 2364 with command consoles closed 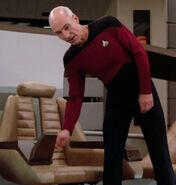 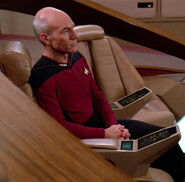 Picard sits in the command chair in 2365, with integrated consoles 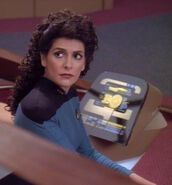 The port console display in 2369

The starboard console in 2366

Unlike previous starship designs, command officers on Defiant-class bridges used two freestanding command consoles which flanked the central command chair. These consoles varied in design throughout the 2370s. These consoles were used for many functions, including accessing sensor data and shipboard communications. (DS9: "Valiant") In emergency situations, the consoles also controlled access to the ship's auto-destruct system. When needed, two command-level officers placed their palm on a hand scanner - built into the console - to verify their identities. (DS9: "The Adversary")

The initial console design, which was in use at the time of the USS Defiant's launch in 2370, consisted of two large, box-shaped consoles mounted on top of a complex structure which surrounded the command chair on three sides. (DS9: "The Search, Part I"). These consoles, along with the support structure, was removed and replaced by two smaller, ergonomically-shaped consoles on individual supports in the early part of 2371. This new console design became standard fleetwide. (DS9: "Equilibrium", "Valiant")

By late 2375, new Defiant-class ships launched with a revised console design, which consisted of two tiered consoles on each side of the command chair. (DS9: "The Dogs of War")

Tim Watters uses the intercom on the USS Valiant in 2374

On Intrepid-class bridges, there was only one large command console, located between the command chair and first officer's station. Accessible to both officers when active, this console had the ability to retract when unused. (VOY: "Caretaker", "Timeless") This console allowed command officers to access and control many of the bridge functions, including flight control, shipboard operations, and the ship's library computer. (VOY: "Future's End", "Year of Hell, Part II", "Tinker Tenor Doctor Spy") This console also had a viewer, enabling the Captain to have a live conversation with any crewmember. (VOY: "Parturition")

The exposed command console, open and ready for use

A close look at the console, displaying a ship's duty roster

While these stations were removed from Sovereign-class bridges by 2375, (Star Trek: Insurrection) they were restored to their original location by 2379, featuring minor upgrades including the addition of handrails for crew use during turbulent situations. (Star Trek Nemesis)

Like the command chair on Galaxy-class bridges, the Sovereign-class command chair (registered as Station 01-001) also included integrated consoles to give commanding officers access to many bridge functions, including communications systems like intercoms and text-based intraship messages. (Star Trek Nemesis)

The original bridge command consoles in 2373

The displays on the command chair and consoles in 2379

Picard operates the armrest intercom while Troi grips her console handrail in 2379
Community content is available under CC-BY-NC unless otherwise noted.
Advertisement