This article is about hand-held communication devices; for the Star Trek: Enterprise episode, please see "The Communicator".

A communicator, or personal receiver, is a hand-held communication device used by many species for person-to-person, person-to-ship, and inter-ship communications. Communicators usually transmitted on subspace frequencies.

Employing a flip-top design, a member of Starfleet spoke directly into the device to give commands and speak with other personnel. (TOS: "The Cage", et al.)

By the 24th century, these communication devices were integrated into the standard uniform badges and became known as combadges. Users no longer had to speak directly into the communicator, but rather could activate and deactivate them with the touch of a finger. The combadge came into general use by 2344. (TNG: "Yesterday's Enterprise") Late-24th century communicators were composed of a crystalline composite of silicon, beryllium, carbon-seventy, and gold. (TNG: "Time's Arrow", "The Last Outpost")

The combadges were also designed to self-activate after their casing was destroyed to aid in the rescue of victims. (VOY: "Time and Again")

When accessing a computer, the communicator of the person at the terminal logged in the user information, thereby making it possible to trace back who accessed the computer. (TNG: "The Drumhead")

In some cases, communicators served purposes beyond basic communication. For example, communicators were often used to allow transporter locks for beaming, thus acting as homing transponders. When used in tandem, two communicators could produce a sonic disruption by using sound beams to create a sympathetic vibration in an unstable object, such as a cliff face. Kirk and Spock used such a technique to ward off a party of angry Capellans on Capella IV in 2267. (TOS: "Friday's Child") 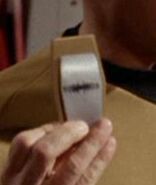 Klingon communicator, 2268
Add an image to this gallery
This article or section is incomplete This page is marked as lacking essential detail, and needs attention. Information regarding expansion requirements may be found on the article's talk page. Feel free to edit this page to assist with this expansion.

Among the items which were sold off on the It's A Wrap! sale and auction on eBay was a 22nd century communicator circuit board from the episode "Shockwave, Part II", [1] and a Klingon communicator, used in Star Trek: The Next Generation. [2]

Dr. Martin Cooper, inventor of the modern mobile phone, credits the TOS communicator as being his inspiration for the technology.[3]

Retrieved from "https://memory-alpha.fandom.com/wiki/Communicator?oldid=997204"
Community content is available under CC-BY-NC unless otherwise noted.