A murderer is loose on the USS Enterprise!

Contamination is a Pocket TNG novel – #16 in the numbered series – written by John Vornholt. Published by Pocket Books, it was first released in February 1991.

From the book jacket
The USS Enterprise is stunned when famed scientist Lynn Costa is murdered in one of the ship's science labs. She and her husband Emil were known as science's greatest ongoing collaboration and, together had received the Federation's highest honors for their achievements in scientific research.

Determined to see the culprit brought to justice, Captain Picard assigns Lt. Worf and Counselor Deanna Troi to the case. Their routine investigation of the ship's science lab soon reveals a dangerous web of deceit, betrayal, and madness. Now, Worf and Troi find themselves struggling against a ruthless assassin set on revenge–for whom murder is only the beginning…

During an emergency drill, Worf leads a security team to Engineering; just to keep things interesting, Geordi La Forge has locked the main doors, causing a small additional delay while Worf's technical expert overrides the controls. Geordi says their response time was excellent, but Worf is dissatisfied, asking whether the turbolifts can be sped up during a real emergency. Geordi says he can prepare a test run, but "you'd better get a security team with strong stomachs."

Drs. Emil and Lynn Costa are part of the science team working on the micro-contamination project. Highly celebrated scientists married for nearly 50 years, they were credited with perfecting the transporter biofilter before joining the Enterprise to pursue any project of their choice. When Lynn deletes a sizable amount of important research collected over the last four years, she is pressed to undergo counseling with Troi, revealing a deep depression and a fear that her husband plans to divorce her. Soon after, she is found dead in one of the starship's cleanroom labs. Though it appears that she suffered from an accidental toxic gas leak, Worf's investigation reveals clues that suggest a premeditated murder. He questions the rest of the science team, including the Betazoid project manager Dr. Karn Milu, Vulcan Dr. Saduk, Antarian Dr. Grastow, human intern Shana Russell, and of course, his primary suspect, Emil.

Worf’s investigation comes under a deadline when Lynn’s death is officially classified as an accident and Emil announces plans to depart the ship at its next port, Kayron Rock. He tasks Wesley with surreptitiously questioning Emil, his former tutor.

Despite interference run by Grastow, Wesley overhears Emil and Karn arguing shortly before Karn is also found dead. Shortly thereafter, Emil boards a shuttlecraft departing the Enterprise for Kayron Rock with Picard, Riker, and a delegation of Kreel diplomats aboard. Midway through the shuttle flight, Emil panics and produces a hand phaser, shooting one of the Kreel aides and then destroying the helm controls. As the shuttle drifts into an asteroid belt, the Enterprise has to move quickly to rescue them, and Emil is taken into custody.

Troi discovers an encoded message hidden within Milu's belongings and uses a Betazoid meditation technique to decipher its cryptic contents – "Lynn is the queen hag, Emil is a naughty jester, Sadok is the heir apparent, Grastow is a footman, Shana is Jasmine." She is poisoned by a device hidden in her food replicator before she can fully understand the message or inform Worf of her discovery.

At Kayron Rock, Emil is subjected to a hearing to determine his involvement in both murders. He reveals that he and Lynn discovered a unique sub-microbe on Vagra II, undetectable by conventional sensors or biofilters. They studied it in secret for years until Karn learned of its existence and wanted to sell its tremendous weapons potential to the highest bidder. Those are the records that Lynn deleted, but Emil claims innocence in both deaths. Aside, he grabs Worf by the arm and swears that the real murderer is still aboard the Enterprise.

Investigating Troi's fragmented notes on the coded chip, Worf learns that Shana is actually Jasmine Terry, the daughter of Megan Terry, a former associate of the Costa's. Twenty years earlier, Megan had been heavily involved in the biofilter project and was having an affair with Emil. He promised to leave Lynn for Megan if Megan surrendered her research, but he reneged on his offer, dismissing her from the project and his life and leaving her (unbeknownst to him?) pregnant. Megan died in disgrace and Jasmine jumped on the opportunity for revenge offered to her by Karn Milu. Karn sought her help in securing the sub-microbe files so she left school, changed her name, and joined the micro-contamination project. However, she put her revenge against Emil ahead of Karn's plans and then killed Karn when he threatened to expose her. Now confronted, she threatens to kill Worf but is subdued when he tricks her into riding a turbolift with him and suddenly ordering the high-speed test. By the time the lift reaches Engineering, Worf and Jasmine tumble out, her unconscious. Worf tells Geordi to cancel his request for faster turbolifts, before passing out.

Jasmine is arrested and remanded to a penal/treatment facility. Emil is cleared of the murder charges, and the Kreel offer him a teaching position at Kayron's Rock – a very genteel form of house arrest – as recompense for his actions aboard the shuttle. The Kreel, who once chafed at the Federation's refusal (under the Prime Directive) to give them transporter technology, have come to realize that they must develop the knowledge and expertise themselves, and having Emil to instruct their young students will be an excellent start. The rest of the science team is disbanded. Saduk accepts a posting to restart the sub-microbe research from scratch by securing another sample from its source.

Troi recovers, and both she and Worf receive congratulations from Captain Picard.

"There is an old Klingon proverb: 'A terrible secret cannot be kept.'"

"You can't prevent madness. The more intelligent we get, the more prone we are to it. We have to consider ourselves lucky that it doesn't affect more of us."

"They use too much of that dreadful spice." 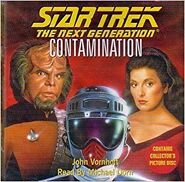 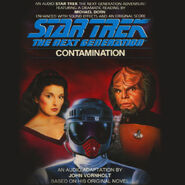 Audiobook cover, digital release
Add an image to this gallery

Antarian
Dr. Grastow's species (though obviously not the same species as seen in Star Trek: Voyager).

Betazoid
One form of Betazoid encryption is to put oneself into a trance and process the message through their subconscious mind. Upon awaking, the message will be indecipherable even to the person who encoded the message, though knowledge of one's own psyche will ultimately allow the code to be broken.

Kreel
Humanoid species.
The Kreel were originally introduced by Peter David in his novel Strike Zone.

"The Child"
There is still some lingering tension between Troi and Worf, after his insistence that her child, Ian Troi, be aborted for the safety of the Enterprise, though this insistence was vetoed by Captain Picard.

Retrieved from "https://memory-alpha.fandom.com/wiki/Contamination_(novel)?oldid=2452081"
Community content is available under CC-BY-NC unless otherwise noted.