The cranial ridges, also referred to as exo-cranial ridges or cranial plates are bony plates on the surface of the forehead on many humanoid species. Some species, such as Humans, Vulcans, and the ancient humanoids do not possess visible cranial ridges.

Klingon-Human hybrids generally inherited cranial ridges from their Klingon parent, although they were less pronounced. (VOY: "Nothing Human")

In 2154, the Klingon augment virus, and the subsequent cure, caused many Klingons to lose their cranial ridges and become more like "Humans." This would be partially cured via cranial reconstruction. (ENT: "Divergence")

During the 23rd century of the alternate reality, helmets issued to the Klingon Defense Force gave all warriors the appearance of cranial ridges. (Star Trek Into Darkness)

As a child, B'Elanna Torres was often mocked and joked at because of her Klingon-inherited cranial ridges. She was referred to by Daniel Byrd as "Miss Turtlehead." (VOY: "Juggernaut") Partly because of this bullying, after she discovered she was pregnant, Torres attempted to resequence the DNA of her fetus in order to eliminate the genes that would manifest cranial ridges. However, she was convinced by her husband, Tom Paris, to abandon this effort. (VOY: "Lineage")

The Cytherian encountered by the USS Enterprise-D in 2367 was fascinated by Worf's prominent cranial plate, among other things. (TNG: "The Nth Degree")

In 2370 of an alternate timeline, Alexander Rozhenko made a plaster cast of his forehead cranial ridges as a birthday gift to his father, Worf, who received it with pride. (TNG: "Parallels")

When he de-evolved due to Barclay's Protomorphosis Syndrome, Worf's cranial plates thickened by 20%. (TNG: "Genesis")

Death is immediate for a Klingon if the cranial exoskeleton is shattered at the tricipital lobe. (TNG: "Descent")

Ktarians have sharp exocranial ridges, which are also present in Ktarian-Human hybrids. If the mother is human, these ridges can cause a rare complication where they become lodged in the uterine wall, as was the case with Naomi Wildman's birth in 2372. (VOY: "Deadlock")

The cranial exoskeleton of a Klingon.

A Human infected by the Klingon augment virus. 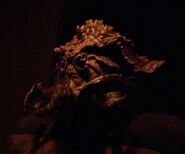 A proto-Klingon with a thickened cranial plate.

During Star Trek productions, some aliens were introduced without ridges, but ridges were added in later productions. Some aliens this happened to include:

In the final draft script of ENT: "Two Days and Two Nights", a person off-screen who Charles Tucker III and Malcolm Reed notice in a Risan nightclub was scripted to be referred to as having cranial ridges, with Reed stating, "She's got lovely cranial ridges." However, the only comment made about this unseen individual in the final version of the episode is Tucker remarking, "I don't think 'she' is the right pronoun."