90 light years in 1.3 secs (655,000,000,000,000 km/s) (using spore drive)
The Crossfield class was a type of Federation starship in service during the mid-23rd century. Though officially designated as a science vessel, during the Klingon-Federation War the class was re-classified as a warship. (DIS: "The Butcher's Knife Cares Not for the Lamb's Cry")

Two ships of the class were equipped with an experimental spore drive propulsion system, the USS Discovery and its more advanced sister ship, the USS Glenn. In November of 2256, "Stone" and "Psycho" noted that Discovery appeared to be a brand new starship, without even "a scratch on the floor" of the shuttlebay. Both the Discovery and the Glenn had been commissioned by that time. (DIS: "Context Is for Kings")

The class was also utilized by the Terran Empire Starfleet in the mirror universe, although that version lacked spore drive technology. (DIS: "Despite Yourself", "Vaulting Ambition")

The Crossfield-class design consisted of a saucer section, a wide secondary hull, and two elongated nacelles.

Although they were longer, Crossfield-class vessels were of generally similar size to those of the Constitution-class. (DIS: "Will You Take My Hand?", "Through the Valley of Shadows")

To facilitate the operation of the spore drive, the saucer section was divided into three concentric sections separated by gaps. When engaging the spore drive, the ship went into black alert, which alerted the crew to the drive's activation. The outer and middle sections housed rings that could rotate clockwise and counter-clockwise respectively, so as to provide excess energy cavitation. (DIS: "The Butcher's Knife Cares Not for the Lamb's Cry")

The ship's armament included phasers and forward and aft photon torpedoes. The ships had deflector shield capability for defense. (DIS: "The Butcher's Knife Cares Not for the Lamb's Cry")

Crossfield-class starships were equipped with at least six tractor beam emitters for towing objects in space, two on the ventral engineering hull (port and starboard), two above the aft doors to the cargo bay to guide boarding shuttles, and two dorsal on the inner-ring of the saucer section. (DIS: "Context Is for Kings"; ST: "Calypso")

Two vessels of this class were known to be utilized by Starfleet to test a theoretical spore drive, following the outbreak of war with the Klingons in 2256. Shortly after achieving a breakthrough, the USS Glenn was crippled and all crew killed in an accident. She was then scuttled by her sister ship, the USS Discovery. (DIS: "Context Is for Kings")

Ships of this class also included a regular warp drive for faster-than-light propulsion.

Discovery's facilities were capable of supporting over three hundred discrete scientific missions – a Starfleet record in 2256. (DIS: "Context Is for Kings")

The ships' design featured polygonal windows to space in crew support compartments including the mess hall and crew quarters. Those same rooms, as well as sickbay and the corridors, mirrored the window design through recessed alcoves on the wall. (DIS: "Context Is for Kings")

The main bridge was located on deck one, with a central command chair for the commanding officer, turbolift access at the front-starboard and rear-center, and a computerized transparent window-viewscreen. Clockwise from the center command chair, the bridge stations comprised of a free-standing multi-purpose station, science, another free-standing multi-purpose station, tactical, helm, operations, spore drive control, communications, and a free-standing science station. (DIS: "Context Is for Kings", "Brother")

Some of the panels on the set of the Discovery's bridge were actual touchscreens that reacted with animations automatically, such as the controls on the captain's chair. [1] Others, like the helm console, played looped animations. (TRR: "Terra Firma, Part 1")

Off of the bridge was the captain's ready room, where, on the Discovery, Captain Gabriel Lorca kept a bowl of fortune cookies on his standing desk. (DIS: "Context Is for Kings", "Despite Yourself")

In 2257, Captain Christopher Pike favored a ready room disconnected from the bridge. This ready room featured a more personalized décor, additional seating, and a conference table as well as a food synthesizer slot and several computer panels. (DIS: "New Eden")

Aboard Discovery, the engineering lab was highly classified and required a breath print for access. Immediately off of main engineering was a cultivation bay where Stamets was growing his own prototaxites stellaviatori spores. Aboard Discovery's sister ship, the Glenn, the engineering section was highly shielded and the hull was double reinforced, preventing transport after a spore drive disaster. (DIS: "Context Is for Kings")

The Glenn had modified the reaction cube in their engineering to hold the tardigrade, as Discovery later did as well. (DIS: "Context Is for Kings")

Disassembly of spore drive equipment aboard the Discovery began in 2257, opening up the engineering lab with exposed conduits and machinery. Nevertheless, the spore drive was still operational. (DIS: "Brother", "New Eden")

The traditional term "main engineering" has yet to be used in relation to Discovery. While the spore drive area was described as "Engineering test bay Alpha" in "Context Is for Kings" and "a standard, uh, engineering workspace" in "Brother", the term "engineering" is often used to describe its location without further qualifiers, even when its occupants called in threats, such as in "Point of Light" or "An Obol for Charon".

Stamets growing his own spores in his engineering lab (2256)

As was common on Starfleet vessels, a series of Jefferies tube crawl ways connected different areas, such as engineering to the shuttlebay. (DIS: "Context Is for Kings")

Sickbay was located on deck four, and featured three biobeds. Similar to on the NX class, sickbay was much more brightly colored than the rest of the ship, being a near white color. (DIS: "The Butcher's Knife Cares Not for the Lamb's Cry", "The War Without, The War Within")

A second sickbay, Sickbay 2, was equipped to treat overflow and noncritical injuries. (DIS: "An Obol for Charon")

Shuttlebays were also present on Crossfield-class starships, with force fields utilized to contain the atmosphere, as was common on starships. (DIS: "Context Is for Kings")

The shuttlebay contained a large platform, delineated by the vessel's insignia, which descended and rotated to enable access to a launch facility for landing pods. Four pods were stored there, leading to a single launch rail and exterior port. (DIS: "Brother")

Aboard the Glenn, the lower stores in the engineering hull were one of the largest storage facilities on the ship. (DIS: "The Butcher's Knife Cares Not for the Lamb's Cry") 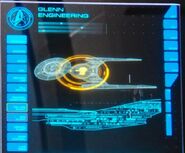 Corridor aboard a Crossfield-class starship (2256)

The transporter room aboard Crossfield-class ships occupied a corridor room. The back of the room was a circular alcove containing the transporter pad. The steps of the transporter glowed red when in use. (DIS: "Choose Your Pain")

Crew quarters of the mid-23rd century tended towards spartan, with only minimal options for customization or decoration. Aboard Discovery, senior officers were assigned their own personal quarters, while junior officers shared quarters. (DIS: "Context Is for Kings")

Crew quarters featured holographic projectors capable of producing a "mirror" image, and a holo-communicator. (DIS: "The Butcher's Knife Cares Not for the Lamb's Cry"; ST: "Runaway")

Guest quarters were located on deck 3. (DIS: "The War Without, The War Within")

Aboard Discovery, Lorca kept his own research lab, containing weapons and specimens that he'd collected (Harry Mudd referred to this lab as Lorca's "man cave"). Located on the lower decks of the engineering hull, this lab featured a holding cell and a window viewing starboard. (DIS: "Context Is for Kings")

A monitor featuring Ripper's biology in Lorca's lab in "The Butcher's Knife Cares Not for the Lamb's Cry" lists "LAB-B."

Following Captain Pike's decision to move the captain's ready room to another location in 2257, the ready room attached to the bridge was converted into a science lab. Numerous pieces of scientific equipment (including a Vulcan data module) were moved into the section, the large window being separated into two ports by a computer terminal, and a large, transparent computer interface subdividing the room. (DIS: "Point of Light")

Crossfield-class starships offered a mess hall capable of serving a few dozen officers at once from five food synthesizers. (DIS: "Context Is for Kings")

Ships of this class also had a room, possibly a gym, for sparring. (DIS: "Project Daedalus")

During the first season, Discovery's mess hall set was a reuse of the crew quarters set, where only food synthesizer #3 was "functional" for CGI work. Between seasons one and two, the mess hall became its own dedicated set, with a second functional door to the corridor, and five functional food synthesizers. Art Director Jody Clement explained visible changes: "Now it's Mess Hall on Deck 5 instead of Mess Hall on Deck 2. We have multiple Mess Halls!" [2]

The class was named for American test pilot Albert Scott Crossfield, who became the first pilot to fly at twice the speed of sound.

The Crossfield-class ships bear some resemblance to the B-24-CLN, which was seen at the Surplus Depot Z15 in TNG: "Unification I". Both models are based off a concept USS Enterprise study model (the B-24-CLN actually being a reuse of the model) designed by Ken Adam and Ralph McQuarrie for Star Trek: Planet of the Titans.

Star Trek: Discovery Designing Starships explains the design process that went into developing the Discovery, including experimenting with different moving parts, hull surface colors and patterns, and ship proportions. Earlier models included short, thicker nacelles, such as a graphic that would be included onscreen in "Light and Shadows".

According to Star Trek: Discovery The Official Starships Collection, the Crossfield class is 750.5 meters long, consistent with the imperial equivalent of 2462 feet 4 inches (750.52 meters) given on a size chart in The Art of Star Trek: Discovery. This would be about 2.5 times the length of a TOS Constitution-class vessel and almost 100 meters longer than a 24th century Sovereign-class ship. However, The Official Starships Collection also claims that the size of the Constitution class was increased by a factor of 1.5 for Star Trek: Discovery, explaining why both ship types are of comparable sizes when they appear together on screen.

The Crossfield class is a playable ship in Star Trek Online, and has a small chance of appearing when a player purchases an add-on called the "Discovery Lock Box". The playable Crossfield comes equipped with the ability to use its spore drive to teleport the ship forward, unleashing a burst of mycelial energy that affects enemies' engines and leaving a payload of torpedoes to detonate in its wake, before teleporting back to its original position – evocative of the tactic employed by Discovery at Corvan II in "The Butcher's Knife Cares Not for the Lamb's Cry". The ability is referred to in-game as the "Lorca Manuever". The mirror universe Crossfield is also a playable ship, available from limited-time "Infinity Promotions"; it has some subtle design differences to the prime ship and comes equipped with "Weaponized Helical Torsion" - the rotating discs of the saucer creating a buildup of mycelial energy which is then unleashed against enemy ships. The "Legendary Starship Bundle" released for the game's tenth anniversary in February 2020 features a 25th-century variant of the Crossfield class, christened the Glenn class after the USS Glenn, which comes with both abilities and can also be made to appear as either the prime or mirror Crossfield. The 32nd century refit was also made available as a playable ship from the "Discovery: Far From Home Lock Box" in May 2021, equipped with a cloaking device usable in combat and a Kwejian assault ship (similar to Booker's ship) for fire support.