From the book jacket
Continuing the mission he began in "Unification", Starfleet Ambassador Spock endeavors to impart the logic of the Vulcan way to a small band of Romulans eager to unite the Romulan Empire and the planet Vulcan. But unbeknownst to them, a Romulan spy has joined the ranks disguised as a Unification sympathizer. Deceived by this traitor, Spock and his students are taken hostage.

Fearful that Spock's knowledge of Federation security will fall into enemy hands, Starfleet dispatches its best ship, the USS Enterprise 1701-D, and most respected captain, Jean-Luc Picard, to secure the hostages' release. Spock's former shipmate from the original Starship Enterprise, Ambassador McCoy – over one hundred forty years old, but still as feisty as ever – is brought in to consult on the negotiations.

Their situation is further complicated when Captain Montgomery Scott confiscates an out-of-service starship and effects his own daring rescue of Spock. Picard must now find a way to preserve the Federation's security and prevent a war while treading a mindfield of danger and deadly Romulan politics that threaten his ship, his crew, and the Federation he serves.

Spock is arrested on an outlying Romulan planet while teaching some Unificationists.

The USS Enterprise-D is the starship sent to negotiate his release, although the Romulans are unaware of whom they have in their possession. To complicate matters, Admiral McCoy is brought along as an expert on Spock but before long, McCoy gets extremely unimpressed with Captain Picard's handling of the situation and takes command himself. Scott has also heard of the developments, and decides to take matters into his own hands. He hijacks an old Constitution-class starship from a museum, along with an old Romulan cloaking device. However, he is captured by the Romulans, who eventually figure out that Spock is in their possession.

McCoy almost succeeds in obtaining Spock and the Unificationists' release, but the Romulan governor knows that Spock is among the prisoners and refuses to deal. With this, McCoy leaves the bridge and Picard is able to resume command. Riker, Data, and Geordi La Forge launch a rescue mission for Scott but are unsuccessful, and are captured as well. However, Scott breaks them out and they head off to save Spock.

Spock and the other Unificationists are put on trial and set be executed but not until they get to tell their stories to the Romulan people. Complications arise when a rival Romulan arrives to claim Spock as his prisoner, leading to a confrontation between him and the planet's governor.

As fighting begins, Scott, Riker, Data, and La Forge arrive and begin to beam up Spock and the others. However, the Romulans soon realize this and begin to attack their ship. Just when things look completely hopeless,they are saved when the Enterprise arrives.

A battle ensues, which the Enterprise nearly loses, but Admiral McCoy negotiates their safe release by informing the Romulan commander that an alien race, the Stugg, are moving their ships to the Romulan border looking for a confrontation. He says the Romulans would be wise to not face a battle on two fronts. The Romulan agrees and the Enterprise goes on her way. 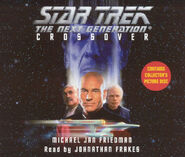