dead Brattain scientist
Enterprise-D officer
Ohniaka III officer
Curt Truman is an actor who worked as a recurring actor on Star Trek: The Next Generation. He was identified through the makeup continuity Polaroid from "Descent" and through several call sheets. Two Starfleet uniforms worn by Truman, one distressed and previously worn by James Washington, were sold off on the It's A Wrap! sale and auction on eBay. [1] [2]

His appearance as a dead Brattain scientist in the Star Trek: The Next Generation fourth season episode "Night Terrors". He filmed his scenes on Wednesday 9 January 1991 on Paramount Stage 16 and was listed as "charred body" on the call sheet.

Truman was also on set on Tuesday 9 July 1991 to appear on the bridge as "conn legs" in scene 31A in the fifth season episode "Redemption II" but did not appear in the final episode. He also filmed Ten Forward scenes for the episode "New Ground" but was not part of that final episode, as well.

He earned his SAG card while working as a construction worker on Murder, She Wrote and appeared in the television series Rude Awakening (1998), Diagnosis Murder (1999, with Scott Lawrence), Sunset Beach (1998-1999), and Passions (2000, with Tim Lounibos). Truman can also be seen in Hollywood Squares (1999, with Tom Bergeron and Whoopi Goldberg), Extra (2003, hosted by Dayna Devon), the television drama Inside a Black Box (2000), and The Bold and the Beautiful (2000-2007). He appeared in a television commercial for Zellers Department Stores and in the music videos "Ghetto Superstar" by Pras Michel and Mya in 1998 and "It's Now or Never" by Elvis Presley. 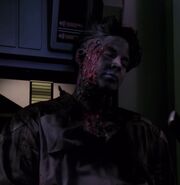