Wong also played a Klingon on the show at one time. A pair of Klingon boots with a costumer's tag bearing his name was sold at It's a Wrap! for US$385. [3] The Klingon costume worn by Wong was sold for US$455. [4]

Prior to his work on Enterprise, Wong worked on Star Trek: Voyager as a frequent background actor and a stand-in. In the latter capacity he worked on episodes such as "Endgame". 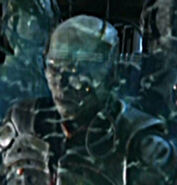 Dead crewmember
ENT: "In a Mirror, Darkly"
(uncredited)
Add an image to this gallery
Retrieved from "https://memory-alpha.fandom.com/wiki/Curtis_Wong?oldid=2415770"
Community content is available under CC-BY-NC unless otherwise noted.